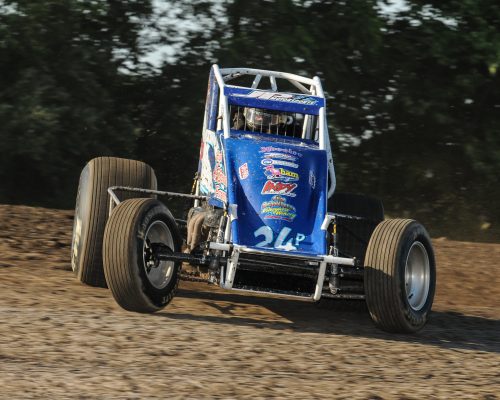 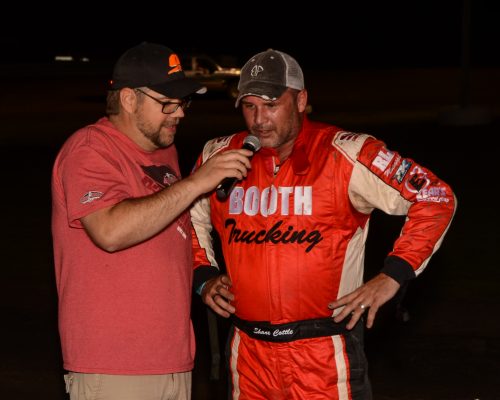 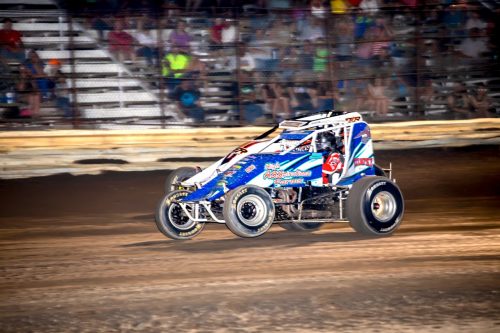 GAS CITY, Ind., June 29 — Thomas Meseraull will have to wait for another chance to post his fifth 25-lap non-wing sprint car feature victory of the 2019 season at Gas City I-69 Speedway, as Shane Cottle of Kansas, Ill. used a last-lap shoot-out to defeat the Waveland, Ind.-based driver by just 0.008 of a second Friday night.

Meseraull started second in the 20-car sprint feature and charged to the outside around polesitter Mike Miller of Wapakoneta, Ohio in Turn 4 to take the lead on the second lap. Cottle, who started eighth in Jamie and Michelle Paul’s DRC with a Foxco-prepped engine, took second from Miller on lap five after a restart when Cole Ketcham of Muncie, Ind. was turned the wrong way between Turns 3 and 4 with four laps down. Defending track champion Clinton Boyles of Brownsburg, Ind. got around Miller on the next lap, and Meseraull, Cottle, Boyles and Miller ran in that order until the pace slowed again with 14 laps down when Dallas Hewitt of Troy, Ohio spun on the frontstretch.

Boyles and Cottle battled fiercely for second following that restart. Boyles got around Cottle on lap 20 before Cottle passed him back two laps later. Ketcham spun low in Turn 2 with 24 laps down to bring out another yellow and set up a one-lap shoot-out to the checkered flag.  Cottle made the winning move by dipping under Meseraull in Turn 3 on the final lap, and they crossed the finish line only inches apart. Boyles finished third, while Jarett Andretti of Indianapolis fought hard throughout the race and finished fourth. Miller hung on for fifth.

The winning car is garaged in Eaton, Ohio and is sponsored by a donkey farm, High ASSpirations Farms of Eaton; Rumpke of Cincinnati, Ohio and Hawkins Speed Shop of Richmond, Ind.

Tony Main of Farmland, Ind. flipped in Turn 1 working lap one of the sprint B main but got out of his car under his own power.

Losh started third in the modified feature, wrestled the lead away from polesitter Jimmie Haager on lap four, was lapping cars by lap eight, and had a straightaway lead when he took the checkered on lap 20. While he made it look easy, there was a heated four-car battle for second for most of the race. Scott Orr of Columbia City, Ind. passed Haager on the white-flag lap to nail down the runner-up honors, and Aaron Orr got around Haager on the last lap for third. Haager finished fourth followed by the defending track champion, Dillon Nusbaum of Warsaw, Ind.

James Headley Jr. started on the pole of the 15-lap hornet feature with his father right behind him in third place. The senior Headley vaulted into second on the first lap by passing another car he built driven by Kolton Sollars of LaFontaine, Ind. Headley Jr. tried to use the outside line to keep his dad at bay, and his father gave him a few love taps in the rear before he dipped under him on the backstretch for the lead working lap eight. Headley went on to post his second hornet feature victory of the year with his son second, Sollars third, Ryan Piker fourth and Alyssa Clark fifth. The Headleys’ cars are sponsored by Dudding’s Heating and Cooling, Garriott Electric, Edwards Automotive and TJR Trucking.

Andy Bishop of Gas City started second in the 15-lap street stock feature and led the first 13 laps before Ron Flaugh of Converse, Ind. stopped between Turns 3 and 4 to bring out a caution. Bishop went to the pits with mechanical difficulties under that yellow, giving the lead to polesitter Joey Spiewak of Merrillville, Ind., second to Wilber and third to Chris Tippit of DeMotte, Ind. The latter peeled off to the pits under the same yellow, however, giving third to Mike Fincher of Rochester, Ind.

Wilber passed Spiewak on the restart working lap 14 and went on to win with his No. 0 sponsored by Nichols Accounting and Fast Lane Auto Sales. Spiewak, Fincher, Michigan’s Matt Carlisle and Cale Ramey of Muncie, Ind. rounded out the top five.

Landis led all 15 laps of the micro-sprint feature. Dain Naida of Adrian, Mich. hounded him for the first 10 laps but then got out of shape in Turn 2 to give Landis some breathing room. Naida finished second followed by Dawson Phillips, Jon Robbins of San Pierre, Ind., and Corbin Gurley.

The “Battle of the Sexes” spectator races went to the boys, as Chris Hall of Marion, Ind. defeated Brittany Edwards, also of Marion. Apparently traction was more important than weight, as both drove trucks. Hall earned $100, a season pass to the track, and a trophy.

For the Fourth of July weekend Gas City will switch to a Saturday night format instead of Friday with its “Star-Spangled Spectacular” on July 6. Sprint cars, UMP modifieds, street stocks, hornets, tough trucks and MMSA mini-sprints are on the card, as is a big fireworks show.

The track will be back in action on Friday nights for its July 12 “Christmas in July” show prior to its Thursday night, July 18 date that is part of USAC Sprint Week.