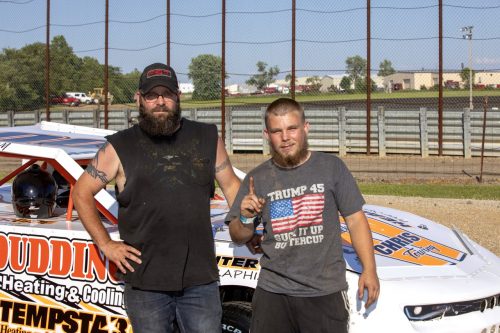 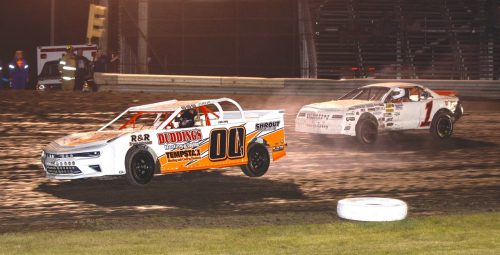 (The release is attached as a Word docx and as a pdf file. Two photos are also attached. Others are available for media use.

HeadleyFatherAndSon2019 caption: James Headley of Marion (left) and his son, James Headley Jr. of Wabash (right) have a huge fan following of family and friends at the Friday night races at Gas City I-69 Speedway. The track will host a special holiday show this week on Saturday, complete with fireworks.

JamesHeadleyJrLeadsDadAtGasCity caption: James Headley Jr. (No. 00) leads his father, James Headley (No. 1) during the hornet feature last Friday night at Gas City I-69 Speedway. The elder Headley passed his son on lap eight and they went on to finish first and second in the 15-lap main event at the Grant County quarter-mile clay oval.

GAS CITY, Ind., July 1 — When Gas City I-69 Speedway stages its special holiday “Star-Spangled Spectacular” program complete with fireworks this Saturday night, it’s pretty safe to expect someone in the Headley family will be in the middle of the action at some point.

After all, James Headley of Marion, Ind. is the winningest driver in the Grant County quarter-mile clay oval’s history, and he once won five features at three different tracks over the Fourth of July weekend. His 15-year-old son, James (JimTom) Headley Jr. of Wabash, Ind., is leading the hornet division point standings at press time with two victories so far this year. And the pair finished first and second last Friday night in Gas City’s hornet feature, with father beating son to the line.

“I think it was around 2004,” the elder Headley said about his super-successful Independence Day weekend. “We ran street stocks Wednesday, Thursday, Friday, Saturday and Sunday night, and we won every night. The races were at Gas City, Kokomo and Montpelier.

“I remember after the last feature I came into the pits, crawled out of the car, laid down on the grass, and told the boys, “I’ve done my job. Now you’ll have to load it up; I’m too tired.””

Now 43 years old, Headley has won 11 championships in the street stock division, and has well over 100 feature victories since he started racing in 1996.

“My first year out I won a feature, was Rookie of the Year, and finished second in points,” he recalled. “At that time 40 or 50 cars showed up every night, and we raced three times a week.”

On June 14 he was inducted into Gas City I-69 Speedway’s “Walk of Fame” for his success at the track, located between Indianapolis and Fort Wayne just west of exit 259 of Interstate 69.

His car is No. 1, while his son races the No. 00 in the newly-named hornets class. Dudding’s Heating and Cooling, Garriott Electric, Edwards Automotive and TJR Trucking sponsor the team, among other companies.

Headley owns Headley Tree Service of Marion, and both he and his son are as adept high in the air working out of a bucket on a crane trimming trees as they are in race cars speeding along the ground inches away from other ones at Gas City I-69 Speedway.

They’re the second and third generation of Headleys to race at Gas City.

“My dad, Elza Headley, raced here years ago in stock cars,” Headley explained. “He still comes every night to watch me and JimTom. I was raised on racing; we went to the races as a family, and still do.

“When I was a boy I rooted for my dad and Glenn Bradley, who still races here at Gas City. He’s 60-something now. I’ve known him my whole life. Gas City is close to home, and it’s just part of our life.

“It’s a lot of fun, and it’s a way for our family and friends to get together,” he added. “On a normal night at Gas City there are at least 30 members of our family here.

“Mostly they’re here to support JimTom,” he added with a grin. “I have two daughters too, and they’re big supporters of us.”

The Headleys also drag race, primarily at Bunker Hill and Muncie. Those cars are different than the ones they drive at Gas City.

“We have about five race cars in our garage at any given time,” Headley said. “There’s no room in the garage anymore, so some of them sit outside.”

He also helps prepare some of the cars he and his son will race against.

“I build a few cars, like this one,” he said, pointing to the No. 33 that is driven by Kolton Sollars of LaFontaine, Ind. “We just put this one together. There’s probably about eight or so other drivers I help. Besides working on their cars, I give them pointers now and then.”

He said the family used to race three nights a week, competing in about 50 events a year, but now concentrates on the events at Gas City.

“It’s a good, family track,” he added. “Everyone who comes here will have a good time.”

Not surprisingly, racing has been a way of life for his son too.

“I built him a go-kart track in the backyard when he was younger, so he’s been turning circles for a long time,” Headley said. “He ran his first demo derby when he was 10.”

Headley Jr. is in the class of 2022 at Southwood Junior-Senior High School. He doesn’t participate in other sports, but is focused on racing. He looks older than his age because like his father, he sports a beard.

“It’s like a second job,” Headley Jr. said of racing. “Some of the kids at school say it’s a waste of money, but others say as long as you’re having fun, go for it.

“And I like Gas City too,” he added. “The surface is usually tacky, which is the way I like it. They have good food too.”

“The Headley family is a real fixture at Gas City,” said Jerry Gappens, promoter of the speedway. “Through three generations their success here is unparalleled by any other racing family. What they’ve accomplished as a family is pretty special.”

Gas City’s usual night of operation is Friday night, but over the Fourth of July holiday it will host races on Saturday. Non-wing sprint cars, UMP modifieds, street stocks, hornets, tough trucks and MMSA mini-sprints are on the card on July 6.

Another special show is on the docket on Thursday, July 18 when the track hosts the USAC AMSOIL sprint cars as part of Indiana Sprint Week. Non-wing micro-sprints will share the card.