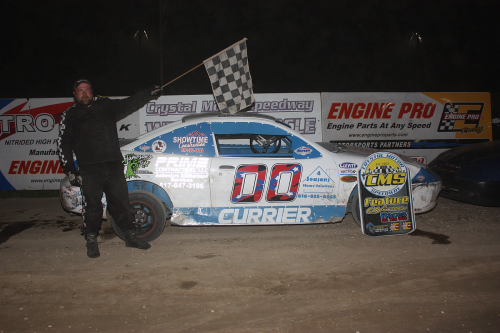 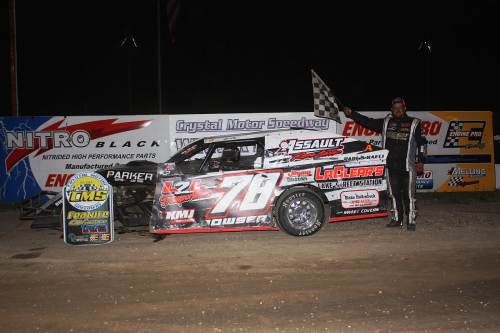 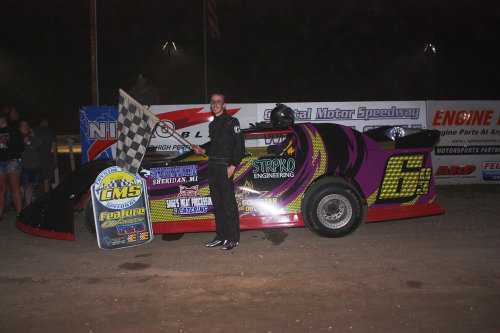 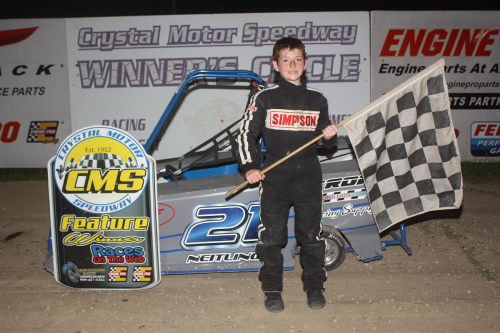 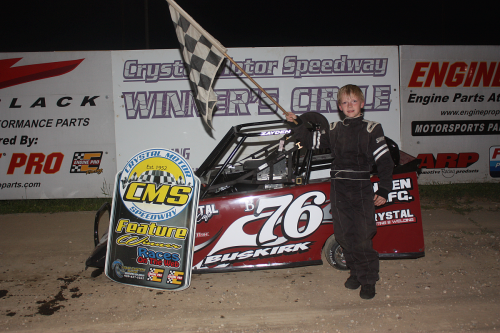 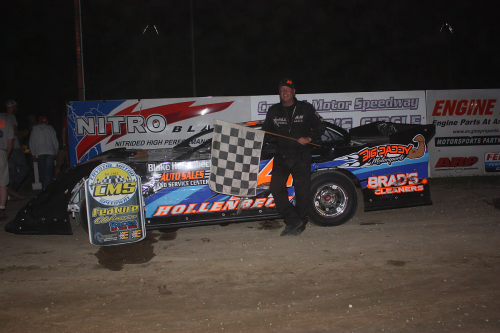 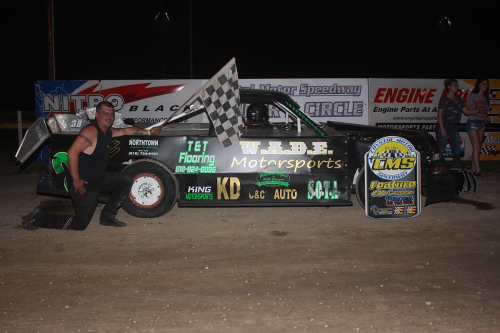 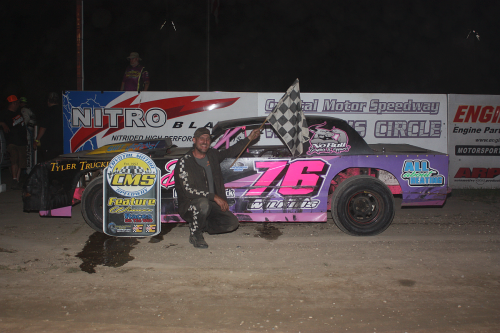 Saturday night was a hot summer evening at Crystal Motor Speedway with over 119 cars in the pits as the first of three races to be run over the next week unfolded.

The twice rained out ‘Twin Flinn’ event, sponsored by Crystal Micro-Systems of Crystal and Mt. Pleasant finally was completed. The exhibition consists of two different races on the same track, going in opposite directions. Employees of Crystal Micro Systems drove the cars, and fittingly, it was won by Jeremy Sheets, the owner of the company.

Last week, Sheridan’s Montana Bupp led all but the final few laps of the Kentucky Fried Chicken Late Model feature before having to settle for second. This weekend, Bupp once again grabbed the early lead and then spent the rest of the race fighting off Amanda Wing of Middleton. Despite having Wing almost overtaking him twice in the closing laps, Bupp held on for his very first Late Model Feature event. Logan Arntz of Vestaburg and Midland’s Derek Hilliker grabbed the B Mains, while Bupp, Wing, and Tom Dusen of Muskegon took heats.

In the Next Level Graphics and Design Street Stock division, Bill Wilkins of Gowen picked up another season win over Tony Campbell, Belding, and Don Rohn of Sheridan. Wilkins and Campbell picked up heats in an earlier competition.

Mike Currier of Fenwick picked up another feature win in the Races On The Web Flinn Stock division over Rusty Sowles of Greenville, and Jason Barrus of Sheridan in the event that went green flag to checker without a caution. Currier and Brandon Ciganik of Greenville grabbed wins in the heat events.
Jim Beltz of Kent City held the lead in the Engine Pro Pro Truck feature for most of the event, but a late caution took away his sizeable lead as the pack was regrouped. As the final green flag fell, Tim Sooy of Stanton was able to get around him where he was able to cruise on to win over Vern Buskirk of Crystal and Beltz. Sooy and Buskirk also posed for photos winners circle for heat wins.

In the Greenville Daily News Mini-Wedge class, the six to nine-year-old division was taken by Landyn Neitling of Saginaw over Jazzlyn Hale of Crystal, and Mason VanderVeen of Six Lakes. VanderVeen and Hale picked up wins in the heat events. The ten to fourteen-year-old division event was all Zayden Buskirk of Crystal with Mikah Kurkowski of Sidney taking second. Buskirk also took the heat race.

Next week at Crystal Motor Speedway will be a busy week with the track holding its annual July 3rd event on Wednesday with all of the usual eight divisions plus fireworks sponsored by Engine Pro of Grand Rapids. No Late Model points will be awarded for this event. On Saturday night, July 6th, there will a regular program of all divisions, all sponsored by CL Trucking and Excavating of Ionia.

The previously rained out MARFC Night will also be held on August 3rd.  Admission for the Wednesday night race will be $15 for adults and $5 for kids 5-11. On Saturday, adult admission is $12, and kids 5-11 are $5. Pit area admission is $30 for both events. Further information can be found by visiting the track website at crystalmotorspeedway.com or calling the track office at 989.235.5200.