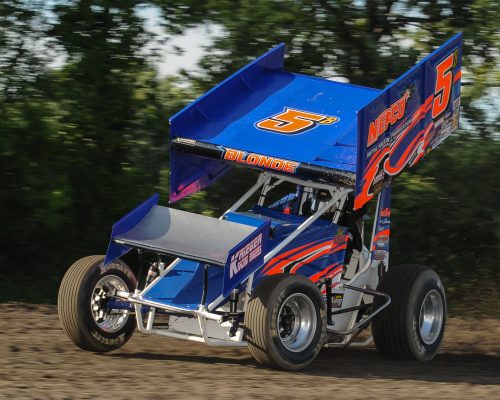 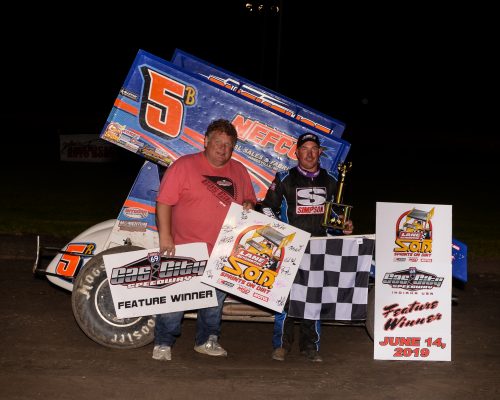 James Headley of Marion, Ind., the winningest driver in Gas City I-69 Speedway history, and Chuck Landis of the Chronicle-Tribune of Marion, Ind. were honored as the 2019 inductees into the track’s Wall of Fame behind the grandstands. They join the inaugural recipients of this honor, Himelick and Thomason.

Blonde, the 2018 SOD champion, won his heat, the dash and the sprint car feature in the NEFCO Metal Sales & Fabrication Maxim with Krieger Racing Engines power. It was the series’ first visit to Gas City in 20 years and four of the series’ first five races were rained out this year, which may have accounted for the rough-and-tumble feature that saw three yellows and three red flags.

Blonde started on the pole but his fellow front-row starter, Zane DeVault of Plymouth, Ind., led the first nine laps. Blonde used lapped traffic to help him pass DeVault on the outside in Turn 4 working lap 10 right before Ryan Ruhl of Coldwater, Mich., who won the season opener, spun in Turn 2 to bring out the race’s third yellow.

Blonde went on to post a 5.649-second victory over DeVault, but not before the race was halted three times. The first red was for Dan McCarron of Dundee, Mich., who flipped hard on the backstretch with 10 laps down while he was running fourth. Jay Steinebach of Hudsonville, Mich. also flipped on the backstretch four laps later to bring out the second red. The third red flew a few minutes later when Josh Turner of Osseo, Mich. and Jason Blonde of Litchfield, Mich. got together on the backstretch. They didn’t flip, but their crash was hard enough to also require a red flag. Luckily none of the drivers were hurt.

Tyler Gunn of Napoleon, Ohio passed DeVault for second on the backstretch following a restart on lap 11, but he got too high on the backstretch on lap 15 and allowed DeVault, Boston Mead of Onstead, Mich. and Kody Kinser of Bloomington, Ind. to get by. Kinser and Gunn passed Mead working lap 18, so at the checkered the top five were Blonde, DeVault, Kinser, Gunn and Mead.

Losh started on the pole of the modified feature and led all 20 laps. His Superior Sales and Service No. 21 was more than a straightaway ahead of the runner-up, Bishop, at the checkered. Bill Griffith started second and ran in that position for the first six laps before Bishop got ahead of him with a move to the inside as they were going through Turn 4. Josh Lolmaugh passed Griffith for third on lap 11 and went on to finish in that spot. Griffith held on for fourth. Jimmy Haager started 16th and last but charged up to fifth at the finish.

Polesitter Alex Watson looked strong in the first half of the midget feature before Gehrke and Aaron Leffel got by him after a yellow for Anton Hernandez. Gehrke had a half straightaway lead over Leffel at the end, while Watson hung on for third. Cory Guingrich and Stratton Briggs rounded out the top five.

Bishop started on the pole and cruised to his third street stock feature victory, while Chris Tippit ran second for all 15 laps. The real fight was for third, which went to Mike Fincher followed by Ron Flaugh and Ervin Turner.

Headley led the first four laps of the 15-lap hornet feature before he dropped out, which gave the lead and eventual victory to his son, James Headley Jr. Alyssa Clark had worked her way up to second by lap five but she stopped at the start-finish line with 11 laps down and her car left the track via a wrecker. Gage Allen inherited second due to her misfortune and he finished in that position followed by Josh Gamblin, Stevie Clark and Jacob Beard.

Jesse Arenas of Marion, Ind. required medical attention after crashing in Turn 4 on the white-flag lap near where the cars enter the track from the pits, and the yellow and the checkered were thrown simultaneously. He was taken to Marion General Hospital and discharged at 4 a.m. Saturday, just in time to celebrate his birthday. “I’ll be back next week!” he said.

The Midwest Oldtimers Vintage Race Car Club was on hand and presented an exhibition of race cars from the past.

Next Friday, June 21, marks the first day of summer and the second annual Jerry Gappens Sr. Memorial. The non-wing 410 sprint car feature will pay $2,000 to win. Last year this race generated one of the most exciting finishes in track history, as C.J. Leary passed Matt Westfall in the fourth turn on the last lap to take the top honors. UMP modifieds, street stocks, super streets, hornets and AMSA mini-sprints will also be part of this huge show.