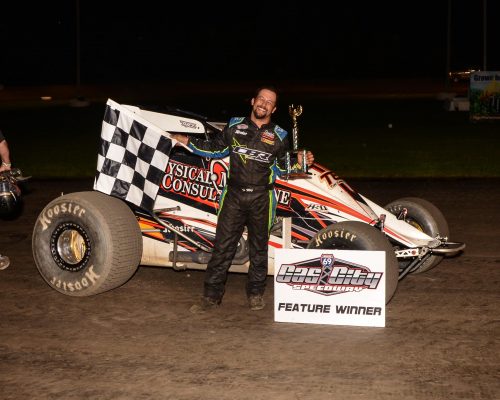 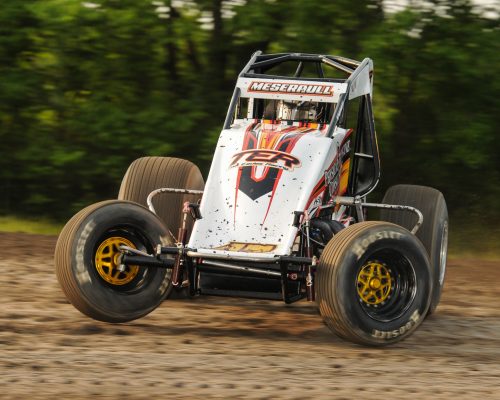 GAS CITY, Ind., June 1 — Thomas Meseraull of Waveland, Ind. closed the month of May with a flourish at Gas City I-69 Speedway by winning his third 25-lap sprint car feature in a row during the quarter-mile clay oval’s “Mayhem” program Friday night.

Polesitter Dylan Woodling of Warsaw, Ind. became the track’s third different 20-lap UMP modified feature winner so far this year. Andy Bishop of Gas City recorded his second street stock feature victory at Gas City in 2019 in that 15-lap main event. Bill Lewis of Lynn, Ind. is the one to beat in super streets, as he posted his third feature victory after 15 laps of competition. Gage Allen of Warren, Ind. was the third different victor in the hornet division in that 15-lapper. Chris Hicks of Fort Jennings, Ohio will go down in the record books as the first 15-lap feature winner at Gas City in the “tough trucks” division. The six-division program attracted 118 race cars.

Meseraull started sixth in Tom Eades’ Physical Medicine Consultants DRC with a Stensland-prepped Chevy engine and took the lead from Matt Westfall on lap six. He built up a straightaway lead, but it evaporated with 19 laps down when a yellow waved for Kyle Simon, who had a flat tire, and a bigger tire marking the inside of Turn 4 became dislodged.

Two more cautions kept the field close, but “T-Mez” was up to the challenge. Corey Smith dipped under Westfall in Turn 4 working lap 21 to bring the runner-up honors home to Kokomo, Ind. with his DRC, which is sponsored by Napa of Russiaville and Claxton Engines. Westfall, of Pleasant Hill, Ohio, finished third in the Ray Marshall Motorsports/Buckeye Machine/DPI Ink Maxim, which has a Hampshire-tuned engine. Travis Hery of Columbus, Ohio, who is a postdoctoral researcher at The Ohio State University, finished fourth in the Spiker Racing Products No. 21H. Scotty Weir of Marion, Ind. came from ninth place to round out the top five in Scott and Donna Pedersen’s DRC, which is sponsored by Red’s Racing Engines and Indy Race Parts and has a Pedersen powerplant.

Isaac Chapple of Wilkinson, Ind. flipped in Turn 4 in the first sprint heat while running second with one lap down. Luckily he got out of his sprint car under his own power, and even returned to compete in the B main.

Woodling led the initial start of the UMP modified feature but Bill Griffith wrestled the lead away from him on lap two right before a yellow flew for Todd Sherman, who was third when he was hit and spun in Turn 1. A red flew with six laps down for Percy Gendreau, whose 2018 Diamond with a Pace Performance CT525 caught on fire and stopped between Turns 1 and 2. Luckily the driver from Lima, Ohio was unhurt.

Griffith continued to lead until Woodling dipped under him coming out of Turn 4 working lap nine. Woodling was able to increase his lead, and Griffith held on for second. Dillon Nusbaum came from 12th to finish third. Shane O’Connor and Ryan Sutter rounded out the top five.

The street stock feature was highlighted by a battle of the 14s, as Bishop’s No. 14 led Chris Tippit’s No. 14T most of the race. Travis Nichols and Ervin Turner, who were fifth and sixth at the time, got together to bring out a yellow with 11 laps down. Two laps after the restart Mike Fincher got by Tippit for second in Turn 4, right before the last yellow flew when the fifth-place driver, Ron Flaugh, spun in Turn 4. Bishop’s Thompson Trucking-sponsored car had a comfortable lead over Fincher at the end. Tippit, Jeff Hinkley and Jeremy Stocker were next across the line.

Lewis, driving another Thompson Trucking-sponsored No. 14, led all 15 laps of the super street feature from the pole. Jeffery Jessup finished second. The best battle was between Jeff Matheny and Bill Bradley, who finished third and fourth, respectively.  Tony Anderson rounded out the top five.

Josh Gamblin got a great start and blasted from fourth to the lead of the hornet feature on the first lap. Allen hit him in the rear so much that Gamblin’s rear bumper was dragging at the end, but Allen got by with a move to the outside in Turn 4 on the last lap for the victory. Gamblin hung on for second followed by James Headley Jr., Logan Easterday and Gerald Owens. The latter started way back in 12th in the 24-car field.

Hicks dominated the tough trucks feature, with Chris Bitters a distance second. The best battle was for third, which went to Devon Hower over Leslie Hurd. Dustin Ratliff rounded out the top five.

This coming Wednesday night, June 5, is one of the biggest shows of the year at Gas City as the track is part of “Indiana Midget Week” for the USAC NOS Energy Drink national midgets. Sprint cars and 600cc non-wing mini-sprints are also on the schedule for the mid-week program. An adult general admission ticket costs $25; tickets for students are $10 with their school IDs and children 12 and under are free. A pit pass costs $30. The pit gate is slated to open at 3 p.m. and the grandstands at 5 p.m. Hot laps start at 6:30 p.m., time trials are at 6:45 p.m. and the racing begins at 7:30 p.m. The speedway is located on State Road 22 or exit 259 off Interstate 69 in Gas City.

There won’t be any races at Gas City on Friday, June 7, but the action resumes on Friday, June 14 with the second annual “Jack and Jiggs Classic” named in honor of track owner Jack Himelick and former promoter Jiggs Thomason.  Sprint on Dirt (SOD) winged sprint cars, USAC Midwest Thunder SpeeD2 midgets, UMP modifieds, street stocks, super streets, and hornets (paying $400 to win) are on the schedule. Last year 106 race cars were in action at this show. The Midwest Oldtimers Vintage Race Car Club will also present an exhibition of race cars from the past.