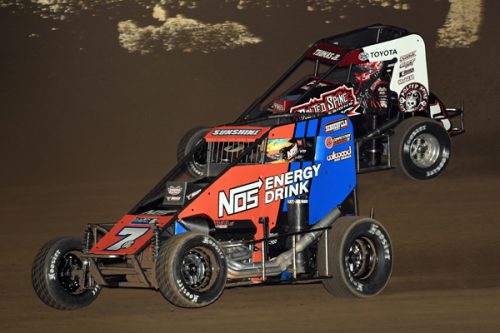 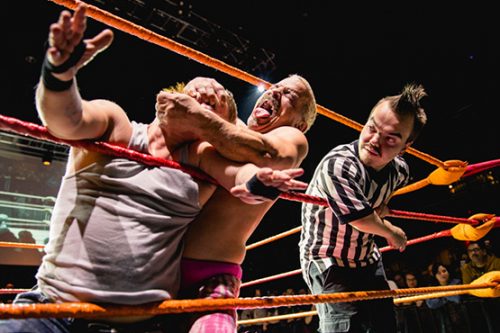 ( Two photos are also attached. The action shot is of Tyler Courtney leading Kevin Thomas Jr. and a photo credit for David Nearpass would be appreciated. The photo of the wrestlers doesn’t require a photo credit. Thank you!)

Featuring top race drivers from around the country and a couple of foreign countries, the event will provide exciting wheel-to-wheel racing on the quarter-mile clay oval. The cars are scaled-down versions of sprint cars and have been very popular race cars for more than 80 years in the United States.

For the 20-minute intermission, speedway officials will roll out a ring on the frontstretch as “micro-sports entertainers” will entertain with exhibition boxing and wrestling bouts. Putting on the gloves will be “Skinny Timmy” versus “2 Tuff Dustin,” while “TEO” will take on “BAM-BAM” in wrestling.

The participants are professional wrestlers and tour the country entertaining large crowds at arenas and fairs.

“Our goal is to provide a total entertainment experience for our fans,” said Jerry Gappens, promoter of Gas City I-69 Speedway. “We want to provide a sports platform with entertainment you don’t see regularly. I feel the demographics are very similar for auto racing and professional wrestling, so I thought this might be a great combination to help expand the appeal of this great event.”

In celebrating of popularity of “small,” the speedway concessions will feature one-time menu items such as fried shrimp, braised short ribs and miniature donuts.

Tickets are available at the speedway ticket office the night of the event. Gates open at 5 p.m., hot laps are at 6:30 p.m. and racing will start at 7:30 p.m. Ticket prices are $25 for adults, $10 for students, and children 12 and under are free. Go to gascityI69speedway.com for more information. The speedway is located on State Road 22 or exit 259 off Interstate 69 in Gas City.