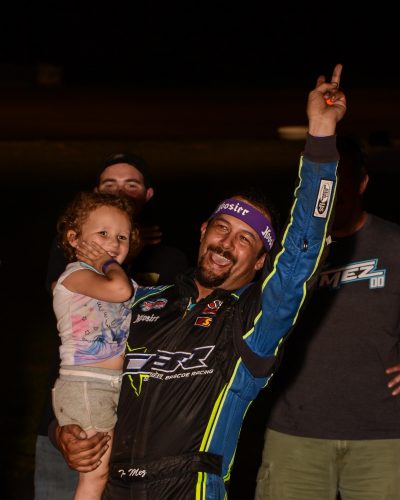 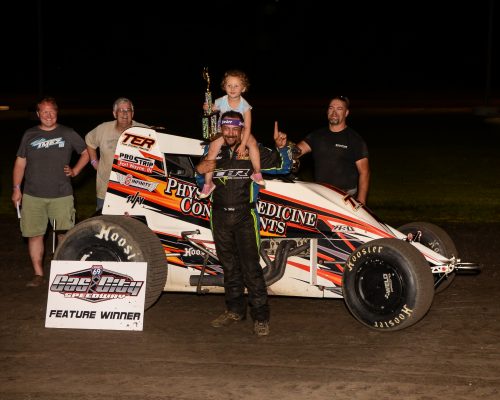 (Two photos are attached of Meseraull in victory lane with his 3-year-old daughter, Carley. No photo credit is necessary. Thank you!

GAS CITY, Ind., May 25 — Thomas Meseraull of Waveland, Ind. came, saw, and conquered the 25-lap non-wing sprint car feature Friday night at Gas City I-69 Speedway as the quarter-mile dirt oval staged its “Salute to the Military” show to kick off the Memorial Day weekend.

It was the second Gas City feature victory of the year for “T-Mez,” as the 2010 Gas City champion also won the feature on May 17. This time he started third in the Physical Medicine Consultants DRC owned by Tom Eades of Sharpsville, Ind., and wrestled the lead from defending track champion Clinton Boyles with a move to the outside in Turn 2 working lap four.

Despite four cautions for spins that tightened up the field, Meseraull had a straightaway lead over runner-up Scotty Weir of Marion, Ind. at the checkered. Weir drove the Benic Enterprises DRC owned by Scott and Donna Pedersen of Greenfield, Ind., which is sponsored by Reds Racing Engines and Indy Race Parts.

Weir took second from Boyles, of Brownsburg, Ind., on lap 13. Boyles hung on for third in Paul Hazen’s DRC out of Columbia City, Ind., which is sponsored by Physical Medicine Consultants, Wix Filters, Rod End Supply and KECO Coatings.

Kirkman started on the pole of the UMP modified feature, led all 20 laps despite numerous restarts, and was one of the most jubilant feature winners ever at the track. His modified is sponsored in part by the Brake Shop, Sherman Enterprises, Don’s Drywall and Remodeling and Caregan Transport.

Frank Marshall of Valparaiso, Ind. started fourth, took just seven laps to move into second place, and finished in that position. The third-place car of defending track champion Dillon Nusbaum of Warsaw, Ind. and the fourth-place car of Ryan Cripe of North Manchester, Ind. came together at the beginning of the backstretch on the last lap, which allowed Zeke McKenzie of Claypool, Ind. to slip into third at the checkered. Nusbaum held on for fourth and Cripe was fifth.

Chris Tippet led all the laps of the 22-car street stock feature except the one that paid. On the 15th and final lap, Bishop and Joey Spiewak slipped under Tippet, with Bishop taking the victory over Spiewak. Tippit crossed the line in third followed by Travis Wolford and Jerrad Krick.

Polesitter Lewis increased his lead in the super street point standings with his second victory in as many races with his Thompson Trucking-sponsored car. He had a straightaway lead over runnerup Bill Bradley at the line. Jeff Jessup, Robert Pardo and John Halsey rounded out the top five.

Gamblin started on the pole of the hornets feature and led all 15 laps. Josh Owens, who started alongside him on the front row, finished second. James Headley Jr. placed third after a fierce battle with Matt Twining. Mark Gott finished fourth and Jacob Beard, who started 13th, rounded out the top five.

Non-wing sprint cars, UMP modifieds, street stocks, super streets, hornets and the first appearance of the tough trucks class will be on the card next Friday, May 31 before the USAC NOS national midgets highlight a mid-week show on Wednesday, June 5 that will also include non-wing sprint cars and 600cc non-wing mini sprints.