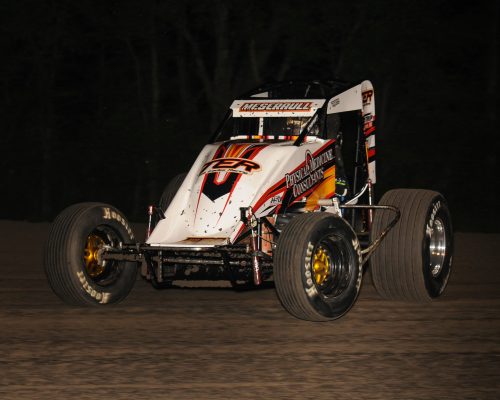 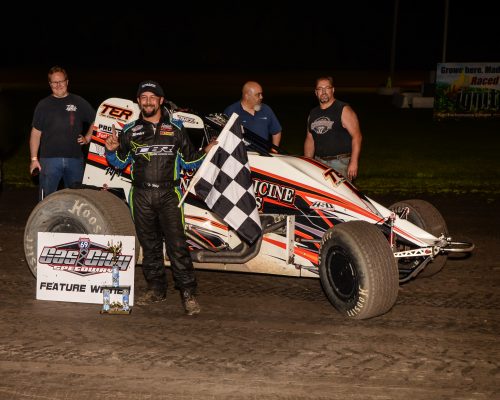 (The release is attached as a Word docx and as a pdf file. Two photos of Thomas Meseraull are also attached. Photo credit of Bill Miller is appreciated.)

GAS CITY, Ind., May 18 — Thomas Meseraull of Waveland, Ind. captured the headlining 25-lap non-wing sprint car feature Friday night at Gas City I-69 Speedway’s “Open-Wheel Madness” show. It was a bit like heaven on earth for open-wheel fans, as with four classes the program offered the most diverse night of open-wheel racing in Indiana.

“T Mez” started fifth in the 20-car non-wing sprint car feature in the No. 47, a DRC chassis which is owned by Tom Eades of Sharpsville, Ind., powered by a Stensland-prepared Chevy engine, sponsored by Physical Medicine Consultants of Fort Wayne, Ind., and wrenched by Allen Brown of Kokomo, Ind.

Polesitter Matt Westfall of Pleasant Hill, Ohio led the first 16 laps in the Ray Marshall Motorsports No. 33M Maxim until Meseraull took the lead in Turn 2. Defending track champion Clinton Boyles of Lees Summit, Mo. started 11th in Paul Hazen’s DRC but steadily moved up until he powered under Westfall for second in Turn 3 on lap 19. Westfall hung on for third followed by Shane Cottle of Kansas, Ill. in Jamie and Michelle Paul’s DRC and Tyler Hewitt of Marion, Ind. in the One More Time Motorsports Maxim. The people’s champion, Dave Darland of Atlanta, Ind., who was making his first start since flipping hard in a USAC sprint race at Eldora Speedway in Ohio on May 10, finished sixth in his wife Brenda’s DRC.

Michael Koontz of Bloomington, Ind. flipped in Turn 4 with 10 laps down, but climbed out of his car under his own power and later finished second in the midget feature.

Alex Nalon led the first eight laps of the 305 winged sprint car feature until Hernandez took the lead with a move to the outside as they went down the backstretch. There were two yellows and a red later in the race and lapped traffic made Hernandez’s job harder, but the 21-year-old driver took the checkered over Bradley Sterrett, Nalon, Jackson Slone and Ethan Barrow in a sprint car sponsored by Velocita-USA and Big D’s Pizza, among other companies.

The red flag in that race with 18 laps down was for the most bizarre accident of the night. Andy Bradley, who was fourth at the time, flipped in Turn 2, and Jordan Welch, who was sixth, flipped in Turn 4. Luckily neither needed the assistance of the ambulance crew and they’ll hope for better luck when the series returns to Gas City on Oct. 5.

Nelson came from the fifth starting spot to nab his first Gas City feature victory in the midget main event. Polesitter Michael Koontz led the first two laps before Chris Baue passed him on a restart after Oliver Akrad stopped between Turns 3 and 4. After a three-way battle for the lead between Koontz, Baue and Nelson, the latter emerged at the head of the pack on lap four and led the rest of the way. Koontz, Nick Spiedel, Aaron Leffel and Hernandez, who was doing double duty, rounded out the top five. Leffel’s effort was particularly noteworthy, as he started 15th.

Paxson started second in the TQ feature, got the jump on his teammate, Johnny Goff, at the start, and led all 15 laps. He was able to build up a huge lead, lost his advantage twice due to yellows, but still held off Tate Martz to become the fourth different winner in as many UMRA TQ midget features so far this year. Cory Clay, Matt Hedrick and Goff rounded out the top five.

The races were covered by Speed Shift TV. The beginning of the show was delayed an hour and a half due to rain.

Tomorrow (Sunday) the American Ethanol late models and modifieds will stage a show at Gas City in a program that will also include a non-points hornets race. The late model feature winner will receive $4,000 and the modified winner $1,500.

Next Friday night is the track’s “Salute to the Military” show for the Memorial Day weekend. Non-wing sprint cars, UMP modifieds, street stocks, super streets and hornets will provide the action. Those five divisions plus the first appearance of the tough trucks class will be on the card on Friday, May 31 before the USAC NOS national midgets highlight a mid-week show on Wednesday, June 5 that will also include non-wing sprint cars and 600cc non-wing mini sprints.