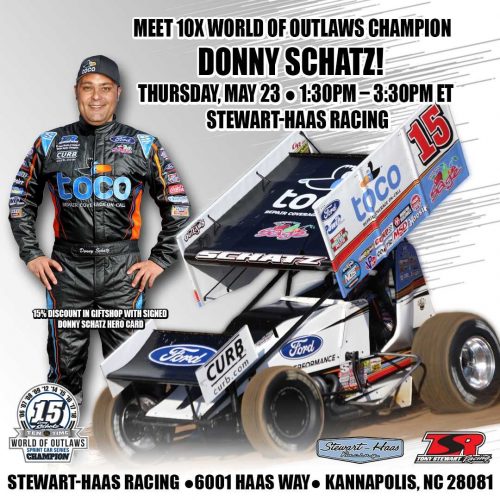 The appearance will be in conjunction with Patriot Nationals featuring the World of Outlaws (WoO) NOS® Energy Sprint Car Series at The Dirt Track @ Charlotte Motor Speedway (CMS) on May 24 – 25. Schatz will sign autographs, take photos with customers and will be joined at SHR by his traveling merchandise trailer which will be open for the duration of the event. Fans will also have an opportunity to take an up-close look at the No. 15 Toco Warranty/Sage Fruit/Curb/Ford Performance/J&J Auto Racing entry driven by ten-time WoO Series champion, Schatz.

Having posted two WoO victories thus far in 2019, Schatz is currently tied for the Series championship point lead. The North Dakota native has won 12 times at The Dirt Track @ CMS in his career.

Fans who present an autographed Schatz hero card in the SHR gift shop during Thursday’s event will receive a 15% discount off their purchase. (In-store purchases only).

Fans are encouraged to follow the progress of Donny Schatz, Tony Stewart Racing and the No. 15 Toco Warranty/Sage Fruit/Curb/Ford Performance/J&J Auto Racing motorsports team on the Web and on social media. More information can be found at www.tonystewartracing.com, as well as at www.donnyschatzmotorsports.com.
Tony Stewart Racing: Facebook at www.facebook.com/TonyStewartRacing or on Twitter and Instagram @TonyStewart_Rcg.

Watch Donny Schatz and Tony Stewart Racing live on www.dirtvision.com during each and every World of Outlaws NOS® Energy Sprint Car Series event in 2019.