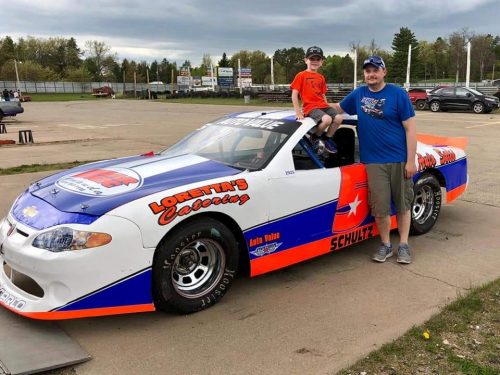 CUTLINE – Vulcan’s Tim Schultz Jr. will take on a mix of tough veterans and some promising rookie candidates in Norway Speedway’s Auto Value Super Stock division in 2019. The season opens Friday May 24 at 6:45 p.m.

(handful of new faces will spice up division in ’19)

The third-generation racer has captured the division crown the past two seasons. A few new faces in the division plus a handful of tough, familiar foes are guaranteed to make the championship chase a tough one for Schultz who chalked up four feature wins and seven fast time awards a year ago.

Other top regular competitors who are expected back on a full-time basis include Marinette, Wisconsin’s Kevin Peterson, Pembine, Wisconsin’s Anthony Schiefelbein, Vulcan’s John Mattia Jr. and John and Savanna Novara of Kingsford.

Among the rookie candidates will be 2018 stock four champion Adam Faull of Vulcan, Athelstane, Wisconsin’s Kelly LaCount and the Vulcan brother act of Jake and Jesse Dulford. Ishpeming’s Gary Stanaway will also return to the super stock ranks full time in 2019.

Part-timers fans can expect to see on occasion will include Peshtigo native John Komp and Norway veteran and diehard Ford campaigner Al Bilski. From the Fox Valley Norway fans can expect occasional visits from Tony, Peter and Jeff Wilz of Menasha, Alex Seidl of Appleton and Trev, Derek and Ed Howard from Kaukauna.

A total of 17 events are scheduled with things getting started Saturday, May 18 with the annual Island Resort Car Show in Harris from 10 a.m. to 1 p.m. CST followed by a practice session at the track from 2 p.m. to 6 p.m.

Weekly Friday night racing kicks off May 24 with the grandstand opening at 5 p.m. Time trials begin at 5:45 p.m. with the first green flag of the ’19 season flying at 7 p.m.

Please continue to check Norwayspeedway.com for updates as well as the track’s page on Facebook.