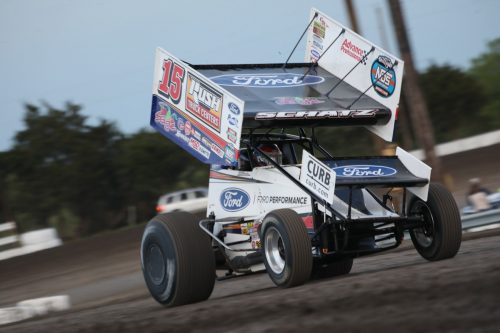 BROWNSBURG, Ind. (April 15, 2019) – Despite the weekend ultimately cut in half due to wet weather invading much of Texas on Saturday afternoon, Fargo, North Dakota’s Donny Schatz made the most of his trip to Devil’s Bowl Speedway with the World of Outlaws Sprint Car Series and continued his impressive stretch of consistency with another top-ten performance on Friday night, April 12.

“I’ve always enjoyed racing at Devil’s Bowl Speedway. We’ve had some success there, so that makes it easy to go back,” Donny Schatz said regarding the Texas Outlaw Nationals. “I think we were better than where we finished, but consistency is important. We’ll take this and move forward.”

Donny Schatz will enjoy an off-weekend before returning to World of Outlaws Sprint Car Series competition on Friday through Sunday, April 26-28, with a three-day sweep through areas of Missouri and Illinois. The ten-time and defending World of Outlaws champion will visit Lake Ozark (Mo.) Speedway, Federated Auto Parts Raceway at I-55 in Pevely, Mo., and Jacksonville (Ill.) Speedway during his three-day trek, ultimately working to takeover the World of Outlaws point lead, as well as add a few more marks in the win column.

In fact, Donny Schatz is the defending World of Outlaws winner at Lake Ozark Speedway, scoring $10,000 over David Gravel and Kerry Madsen from the inside of row two.

ADDITIONAL MEDIA:
Fans are encouraged to follow the progress of Donny Schatz, Tony Stewart/Curb-Agajanian Racing and the No. 15 Rush Truck Centers/Ford Performance/Curb Records/Sage Fruit/Absolute Automation & Security/J&J Auto Racing motorsports team on the Web and on social media. More information can be found at www.tonystewartracing.com, as well as at www.donnyschatzmotorsports.com.