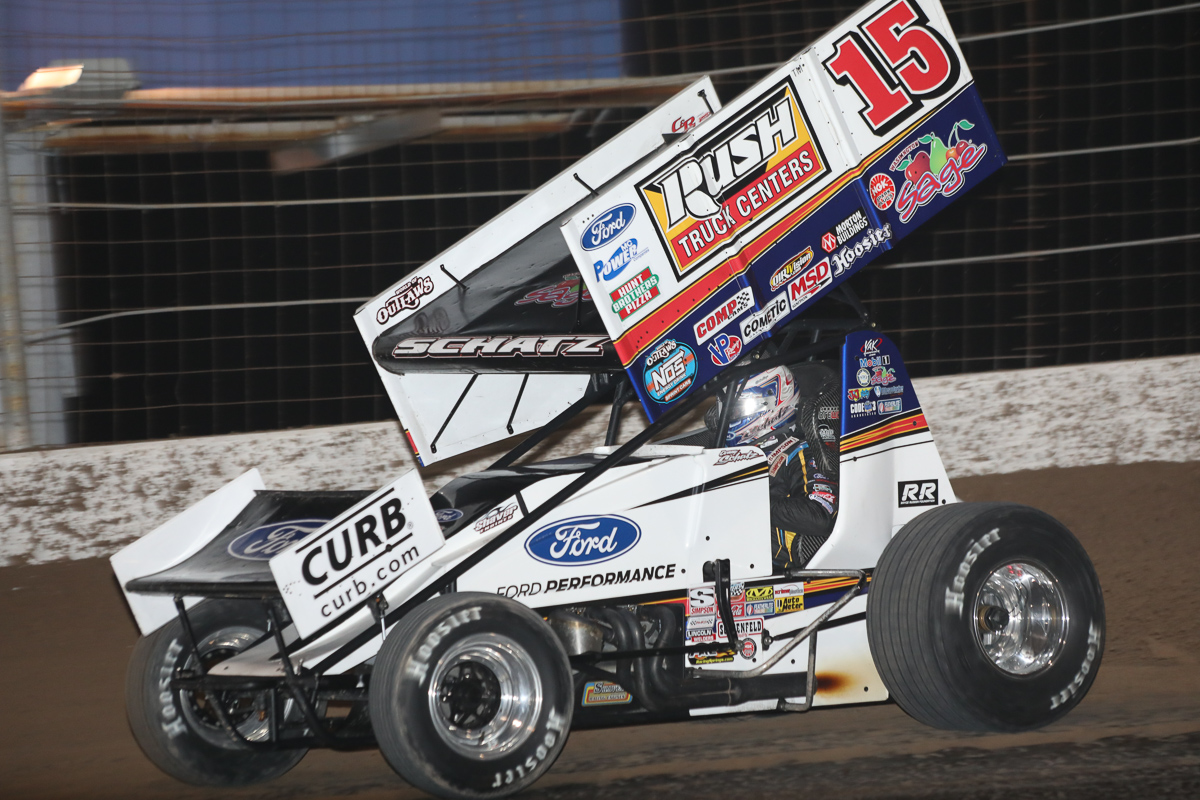 BROWNSBURG, Ind. (March 18, 2019) – Entering the weekend, Donny Schatz was 20 points behind Daryn Pittman in the World of Outlaws Sprint Car Series championship standings. With the weekend events now complete, the Fargo, North Dakota-native is now only four points behind Pittman, well within striking distance as another round of the World of Outlaws’ West Coast Swing looms.

Schatz, driver of the Tony Stewart/Curb-Agajanian Racing/Rush Truck Centers/Ford Performance/Curb Records/Sage Fruit/Absolute Automation & Security/No. 15 sprint car, joined the Greatest Show On Dirt during visits to Silver Dollar Speedway and Stockton Dirt Track during the recent weekend. Although the defending World of Outlaws champion was unable to earn himself a dash starting position during the weekend pair, Schatz persevered, advancing a grand total of 11 positions in two races while increasing his top-ten streak to seven consecutive in 2019.

Impressive enough, Schatz’ top-ten streak was put to the test on Friday night at Silver Dollar Speedway. Forced to start on the inside of row seven after finishing fourth during his respective heat race, Schatz did not hesitate, but instead methodically pick his way through the front half of field. When the dust settled, the Silver Dollar start ended up being the highlight of Schatz’ weekend, rallying from 13th to finish fourth in 35 laps.

Although the climb was shorter, Schatz did advance two positions on Saturday at Stockton Dirt Track, moving ahead from the outside of row five to finish eighth on a choppy, but quick racing surface. Schatz’ top-ten was set up by a third place finish during heat race action.

“It was an interesting weekend, to say the least. Despite track conditions and starting positions not in our favor, we salvaged some solid finishes. My team makes all of that possible,” Donny Schatz said, who is seeking an 11th World of Outlaws championship in 2019. “We’ll do whatever we can to get ourselves up front this weekend at Ocean and Placerville.”

Up next on the schedule, Donny Schatz and Tony Stewart/Curb-Agajanian Racing will continue their West Coast Swing with the World of Outlaws and visit Ocean Speedway and Placerville Speedway, respectively, on Friday and Saturday, March 22 & 23. Schatz finished sixth during his most recent start at Ocean Speedway in 2016, advancing from 18th to do so, claiming Hard Charger Award honors in the process.

Although he finished one position lower than where he started, Schatz highlighted his most recent trek to Placerville with a tenth place finish in September.

ADDITIONAL MEDIA:
Fans are encouraged to follow the progress of Donny Schatz, Tony Stewart/Curb-Agajanian Racing and the No. 15 Rush Truck Centers/Ford Performance/Curb Records/Sage Fruit/Absolute Automation & Security/J&J Auto Racing motorsports team on the Web and on social media. More information can be found atwww.tonystewartracing.com, as well as atwww.donnyschatzmotorsports.com.