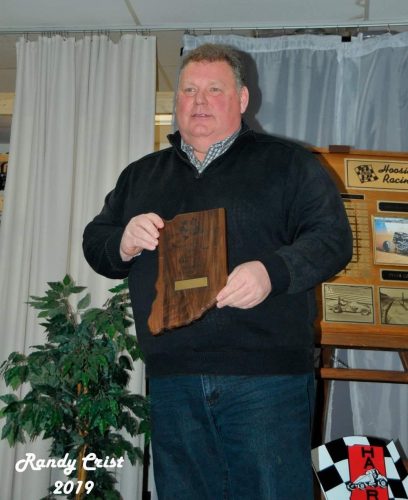 “With more than 60 active race tracks in Indiana, including many with great promoters, it is an honor to be recognized by HARF and its fan membership with this very special award,” said Gappens. “I want to give special thanks to owner Jack Himelick for giving me the opportunity to run his facility; to the fans, participants and sponsors for their support, and our dedicated team that executed the hosting of our fabulous events.”

HARF, one of the oldest and largest racing fan clubs in the country, also honored track champions from around the state, including Clinton Boyles, Gas City I-69 Speedway’s 2018 non-wing sprint car champion.

Special events last season included the return of winged sprint car racing with visits from the Great Lakes Super Sprints and BOSS/FAST on Dirt 410 sprints.  Twelve different types of race cars competed at the track last year. The highlight of the season was the inaugural James Dean Classic, which featured USAC AMSOIL national sprint cars for the season finale.

The second season under Gappens’ helm at Gas City begins Friday night, April 27. Gappens said the entire 2019 schedule would be released this week.

HARF, which has nearly 2,000 members, also presented special awards for outstanding contributions to racing in Indiana. Veteran photographer John Mahoney and Levi Jones, a seven-time USAC champion and USAC’s director of competition, were named to the club’s prestigious Hall of Fame.