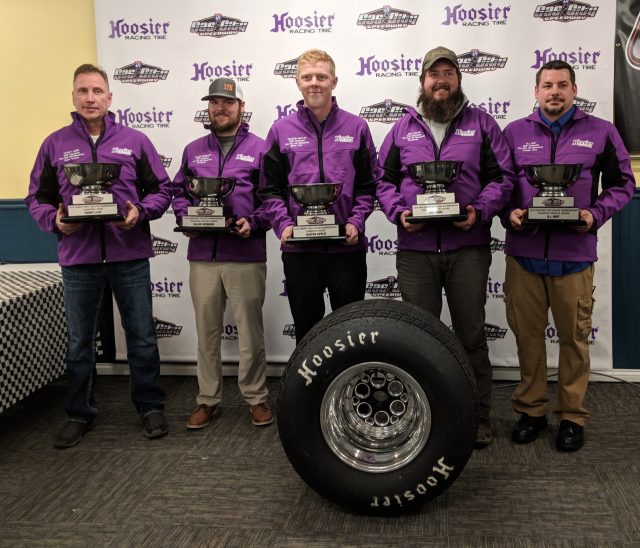 MARION, Ind., Jan. 14 —Over 200 people braved a snowstorm Saturday night to gather at Eventfully Yours Event Center here to celebrate Gas City I-69 Speedway’s 2018 season. The top-10 finishers in each of five weekly divisions, the Rookies of the Year, and special award winners were honored during an evening that featured recurring comments thanking promoter Jerry Gappens for bringing new vitality and regular weekly shows to the quarter-mile dirt oval. The track was only holding occasional events in the past several years before Gappens became the track’s promoter last year.

Approximately $3,500 worth of trophies and $8,500 in point-fund money was distributed to the track’s 262 weekly racers, who also shared nearly $250,000 in purse money throughout the season.

Luke Harbison of Fishers, Ind. and Bryar Schroeter of Kokomo, Ind. were the co-Rookies of the Year in the sprint car division.

Jarrett Rennaker of Huntington, Ind. was the super street Rookie of the Year.

James Headley Jr. of Wabash, Ind., son of super street and thunder car driver James Headley, was the Rookie of the Year in the FWD compact division.

The keynote speaker was Tom Bigelow, a member of both the National Midget Auto Racing Hall of Fame and the National Sprint Car Hall of Fame, and a nine-time starter in the Indianapolis 500.

He told the drivers to set big goals as well as smaller, more attainable goals to help them reach the big goal. He disclosed that he flipped in the first midget race he entered, but he won his first sprint car race.

“Learn how to drive that car, and don’t let it drive you,” he said. He also emphasized that drivers should take care of their sponsors and fans.

“Don’t just pack up and leave at the end of the night,” said Bigelow, who noted that he made it a practice to shake each fan’s hand after he signed an autograph.

And even in this day of engineers, he said learning how to set up a race car is still something each driver needs to do. “You need to know what’s going on,” he noted.

“The people in this room are the grassroots of racing, and the way you treat other people you meet in the sport is very important,” he emphasized.

Gappens said he is close to finalizing the track’s 2019 schedule, and the final version will include 20-22 events. He also recognized Susannah Stapp of Hoosier Tire Midwest, and thanked Hoosier, Marion Tire, Miller’s American Auto Body, Indiana Oxygen, Brandt’s Harley-Davidson, John and Sheril Long and Thompson Trucking for their support.

* Photographers of the Year Awards: Bill Miller and Randy Crist;

* “Agony of Defeat” Award (for surviving the most dramatic flip of 2018): Tom Davies;

* Special Promotion of the Year Award: Holt, Ervin Turner of Marion and Ron Flaugh of Converse, Ind. for raising $5,000 to stage the “Thunder Car Rumble.”