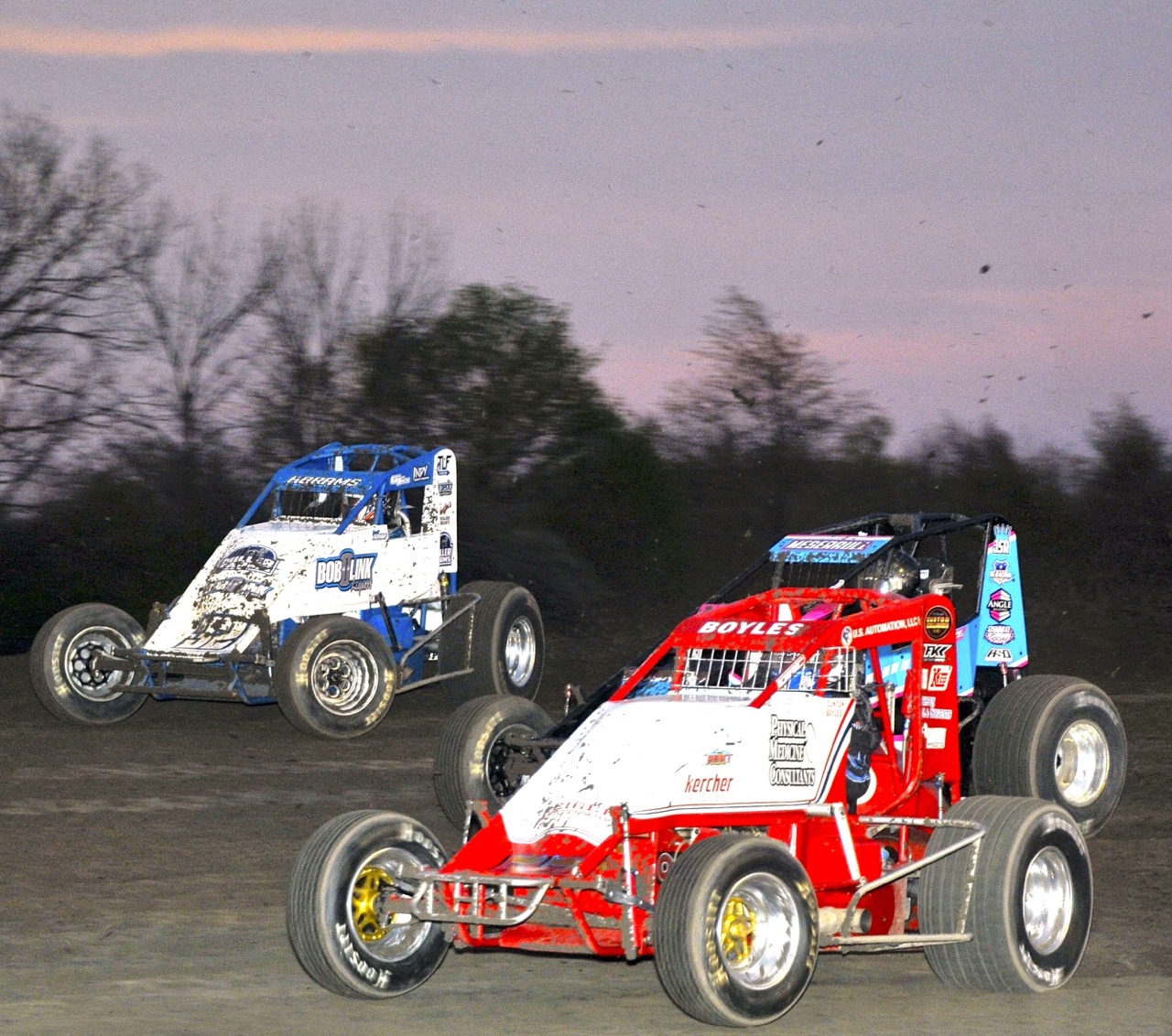 GAS CITY, Ind., Jan. 7 — Clinton Boyles, a native of Greenwood, Mo. who currently lives in Lees Summit, Mo., earned the non-wing sprint car track championship at Gas City I-69 Speedway in 2018 over 76 other drivers by posting three consecutive feature victories and two additional top-five finishes in the quarter-mile dirt oval’s nine regular sprint car events. It was a remarkable accomplishment since the 23-year-old Boyles had only driven at Gas City I-69 Speedway twice before the 2018 season opener in April.

Shane Cottle of Kansas, Ill. won the season opener and finished second in the championship driving Steve and Carla Phillips’ No. 71P DRC powered by a Foxco engine the first part of the year. That car is sponsored by Half Moon Restaurant and Brewery, Frank and Jill Daigh, and PennGrade 1 motor oil. He and Boyles were second and first in the point standings, respectively, when their rivalry became more than a little heated during the feature on July 6, adding to the steamy nature of the “Beach Night/Summer Thunder” show. Cottle finished the season in the famous Goacher Racing No. 5G, and remained second in the championship. That car is a DRC chassis with a Jeff Claxton-prepped engine, and its primary sponsor is Parallax Power Supply.

Tyler Hewitt of Marion, Ind. stayed out of the controversies and placed third in the year-end standings with his bright yellow No. 97X Maxim sponsored by his engine preparer, McGunegill Engine Performance (MEP). Garrett Abrams of Rushville, Ind. placed fourth in the No. 32 DRC, which is sponsored in part by Bob-O-Link Liquors, TLF Logistics and Torpedo Ventures. Dallas Hewitt of Troy, Ohio was fifth in the No. 18 DRC sponsored by Carts & Parts of Union City, Ind. and King’s Auto Body.

Gas City I-69 Speedway, which distributed nearly $250,000 in purse money to its five classes of weekly racers during the season, bestowed its non-wing sprint car Rookie of the Year award to two drivers: Harbison and Bryar Schroeter of Kokomo, Ind.

The first co-Rookie of the Year, Harbison, made his first start ever at Gas City at the season opener with his No. 40, which is sponsored by CustomPrintProducts.com and Krueckeberg Auction and Realty. It’s a Mach I chassis powered by a Tranter Chevy engine. The other co-Rookie of the Year, Schroeter, finished 11th in the point standings with his No. 21S, which is a Stealth chassis sponsored by Billy’s Auto Repair, JR New and Used Tires and Taylor Powder Coating, all of Kokomo.

In addition to Boyles and Cottle, other non-wing sprint car feature winners in the hotly contested division were Meseraull with two feature victories and one each for C.J. Leary of Greenfield, Ind.; Steve Irwin of Fenton, Mich., and the “Flying Fireman,” Shane Cockrum of Benton, Ill., so there were six different feature winners in the track’s regular sprint car action in all. The division attracted drivers from as far away as Australia to compete at the Grant County, Ind. track about one hour and 23 minutes north of Indianapolis.

The first was when Leary passed the versatile Matt Westfall of Pleasant Hill, Ohio in the fourth turn on the last lap to win the 25-lap Jerry Gappens Sr. Memorial on June 29.

Dillon Nusbaum of Warsaw, Ind. was victorious in the closest title fight, as he earned the track’s DIRTcar UMP (United Midwestern Promoters) modified championship by just 66 points over Bradley Jameson of Royal Center, Ind. Nusbaum’s family-owned No. 17N is sponsored in part by Loretta Reeder with Brian Peterson Real Estate, ATC World Class Trailers and Bruner & Son Construction. Nusbaum, who was also the modified track champion at Gas City in 2015, didn’t win a feature at the track in 2018 but he had eight top-five finishes, including three seconds. Jameson didn’t post a feature victory either, but his consistency also paid off with the runner-up honors.

Randy Lines of Marion, Ind. was third in the final point standings followed by Garrett Jameson of Royal Center, Ind., and Bub Roberts of Warren, Ind.

Rounding out the top 10 in the UMP modified standings were Jessica Sroufe of Huntington, Ind.; Jim Mallery of Mooresville, Ind.; Lance Krider of Garrett, Ind.; Andy Bishop of Gas City and Jerry Bland Jr. of Anderson, Ind. Krider earned the track’s UMP modified Rookie of the Year title too.

Zeke McKenzie of Claypool, Ind. had three UMP modified feature victories at Gas City last year. He ended up 12th in the track’s final point standings, but he was seventh in the national standings out of 1,380 drivers, and second to Jamie Lomax of Lake Village, Ind. in the UMP modified Northern Indiana regional point standings. Derek Losh of Rennsaler, Ind., Lines and Nusbaum rounded out the top five in those regional standings.

Lines had two feature victories in the division at Gas City. NASCAR star Kenny Wallace of Imperial, Mo.; Michael Tarlton of Albion, Ind.; Mallery; Roberts; veteran Jerry (the Jedi) Bowersock of Wapakoneta, Ohio and Losh also took feature checkered flags during the course of the year to make up the eight different winners.

Wallace’s victory came in his first visit ever to Gas City, and he said he was amazed at how beautiful the facility is. That night showcased the determination of the track officials, staff, push-truck drivers, race car drivers, crews and fans, as a downpour with hail delayed the event about two hours, but with hard work and patience the show went on.

Lines competed in several divisions. Besides finishing third in the UMP modified points and tenth in the thunder car standings, he earned the track’s super street championship in Sam Thompson’s white No. 14 Rocket chassis by earning 605 points to the 520 posted by runner-up Tony Homan of St. Marys, Ohio. Jarrett Rennaker of Huntington, Ind. finished third and earned the division’s Rookie of the Year honors. James Headley of Marion, Ind. and Josh Robertson of Defiance, Ohio rounded out the top five.

Lines’ super street, which is sponsored in part by Thompson Trucking and R&R Transmission, won three super street features at Gas City last year enroute to the title. The two other features went to Cale and Glenn Bradley of Marion, Ind.

D.J. Holt of Marion, Ind. topped the list of 38 thunder car drivers to earn that championship over 13-year-old Bryce Krider of Garrett, Ind., who was also the division’s Rookie of the Year. Stevie Clark of Kokomo, Ind.; Ron Flaugh of Converse, Ind. and Greg Marlow of Granger, Ind. rounded out the top five.

One of the highlights of the thunder car division was the July 13 “Thunder Car Rumble,” the brainchild of Turner, Holt and Flaugh. It offered a $6,000 purse, which was the largest purse ever posted for thunder cars in the Hoosier state. Watters ended up the big winner, as he took home $700 for winning the 20-lap feature in his Hoosier Pearl Company No. 2. The event wasn’t without controversy, however, as he and leader Headley had contact three laps from the finish.

One of the most spectacular features of the thunder car season occurred on Aug. 3 when Holt flipped in Turn 4 with seven laps down while battling for the lead, and then Braxton Strait’s car caught on fire and he flipped in about the same spot with only two laps to go. Luckily neither was hurt.

Eric Solms of Fairmont, Ind., owner-operator at TFS Trucking, proved he can drive a smaller vehicle well too, as he won the 2018 front-wheel-drive (FWD) compact class with his Silver Bullet No. 88. Alyssa Clark of Columbia City, Ind. won the feature on July 13 and finished second in the championship over Gage Allen of Warren, Ind. and two drivers based in Columbia City, Ind. — Randy Brommer and Jacob Beard.

Kolton Sollars of LaFontaine, Ind.; Brad Evans, also of LaFontaine; James Headley Jr. of Wabash, Ind.; Dillen Loudy of Marion, Ind. and Robbie White of Kokomo, Ind. rounded out the top 10 in that class, which attracted 34 drivers. Headley Jr., who won the season finale, was the division’s Rookie of the Year.

Solms and Josh Gamblin of Kokomo, Ind. both won two features. Allen and Beard each had one win in the class like Clark and Headley Jr.

Despite evenings that often featured around 100 race cars in the pits, almost all of the shows were finished by 11 p.m., which was a testament to the track officials, their staff, the push-truck drivers and the racers and crews themselves.

The top 10 in points in all five weekly divisions, the Rookies of the Year, and others will be honored at the track’s awards banquet Saturday, Jan. 12 at Eventfully Yours Event Center in Marion, Ind.

The point rundowns for all five regular classes follow: