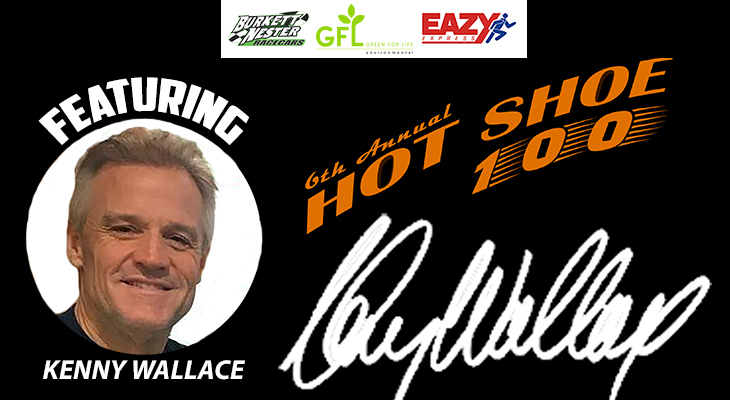 Fox Boyz Racing and the Kinross Speedpark, in conjunction with the Gray Crew and the Hot Shoe 100, are extremely honored and excited to announce that they have secured participation of a twenty-five year veteran of NASCAR series racing at this summer’s event.

This August 2019, as the 6th Annual Hot Shoe 100 makes it’s debut at the Kinross Speedpark, it will do so by welcoming KENNY WALLACE to the mix of talented Modified competitors from across the United States and Canada vying for the $10,024 top prize.

In total he competed in over 900 events before retiring in 2015 but not before becoming only the second driver with over 425 Nationwide starts, and the only driver to have won that series Most Popular Driver award three times (1991, 1994, 2006).

Following his NASCAR career, Wallace stayed close to the sport as part of NASCAR RaceDay on Fox Sports.  He participated in his final broadcast in 2018.

To-date he continues to embrace the sport of auto racing with his active participation in the local grassroots racing across North America.

This makes his appearance, participation and involvement in the Hot Shoe 100 at Kinross Speedpark, in support of the Northern Michigan Cancer Crusaders, that much more special

All parties involved would like to send a special thank-you to Jo-Anne Brooks from Eazy Express, GFL (Green For Life Environmental) and Brian Nester from Burkett-Nester Race Cars for their contribution to making this a reality.

Born out of a passion for racing by the Gray family of Petoskey, Michigan to help local families and friends cope with the impact of cancer, this event has become one of the biggest Modified events in the nation.

The track, Powered 100% by Volunteers, runs a bi-weekly race schedule that begins in June and concludes in early September.