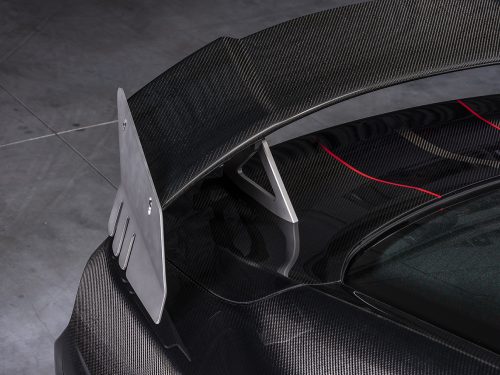 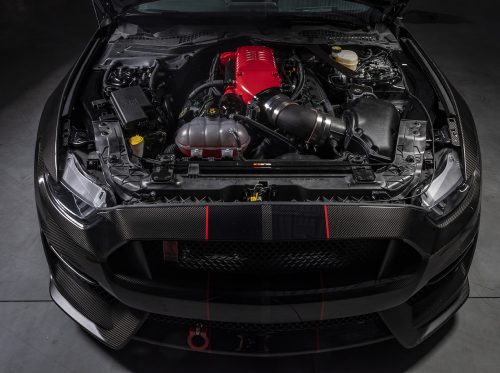 When Ford announced its Shelby GT350R Mustang in 2015, it was described as possessing “never before seen track capability.” Its specification was mouthwatering thanks to positive downforce, MagnaRide suspension and 350 pounds in weight savings courtesy of stripped accessories and the world’s first mass-produced carbon fiber wheels.

When the team at SpeedKore™ Performance Group sat down to look at the GT350R, they saw a huge opportunity to deploy the company’s unrivalled carbon fiber expertise. Unveiled at SEMA 2016, SpeedKore created a full exterior carbon fiber makeover for the car and other Mustang models. It included the front bumper/spoiler, front splitter, fenders, hood, doors, mirror covers, roof, quarter panels, deck lid, rear bumper, rocker covers and rear wing. All are made from pre-preg carbon fiber, molded in-house by craftsmen, and finished in the SpeedKore autoclave.

The full package proved popular with track day enthusiasts who were looking to strip even more weight and create a very distinctive track car. Some customers also requested a more aggressive package, so SpeedKore designers set about adding attitude. Their renderings were transformed into CAD data and the result is three brand new parts that will be unveiled at SEMA 2018. These parts combine with the existing carbon fiber exterior pieces to create a more focused SpeedKore Track Pack for the GT350R.

The new parts include a larger front splitter to increase downforce on the front axle. The rocker panels are more pronounced in response to customer requests for a distinctive look. And star of the show is the SpeedKore carbon fiber rear wing. It is larger but lighter than the Ford factory part. Critical for track day enthusiasts, the wing is manually adjustable through five positions to create maximum downforce or to balance the aero effect over the car. There are five positions, with 2.5-degree increments from +5˚ to -5˚. This will help owners set up their cars for individual race tracks and contribute towards high-speed grip.

The new SpeedKore parts have been fitted to a 2018 Ford Shelby GT350R Mustang, which is featured in the Ford Booth #22000 in Central Hall at SEMA 2018. They are available individually for Ford Shelby GT350 and GT350R, or customers can purchase the entire SpeedKore carbon fiber conversion to transform the look and performance of their car.

In addition to its new carbon fiber parts, the SEMA show car also boasts a brand-new Generation 3, 2.9L Whipple supercharger. Accompanied by a 132mm electronic throttle body and cold-air intake, this Shelby GT350R recently dynoed at 795hp at the wheels. This represents a significant increase over the stock output and is guaranteed to fully exploit the new SpeedKore aerodynamic devices.

“We’re extremely proud of what we’ve achieved with our GT350R carbon fiber package,” said Jim Kacmarcik, president of SpeedKore. “We listened to our customers and Mustang enthusiasts. They all wanted something more distinctive, but it also had to be functional. We know they’re going to love the adjustable rear wing, in particular, because it allows owners to tune the aero to suit individual tracks. You can add downforce when it’s needed, or reduce it for high-speed courses.”

For more information about the SpeedKore carbon fiber options for the Ford Shelby GT350 and GT350R, please contact speed@speedkore.com