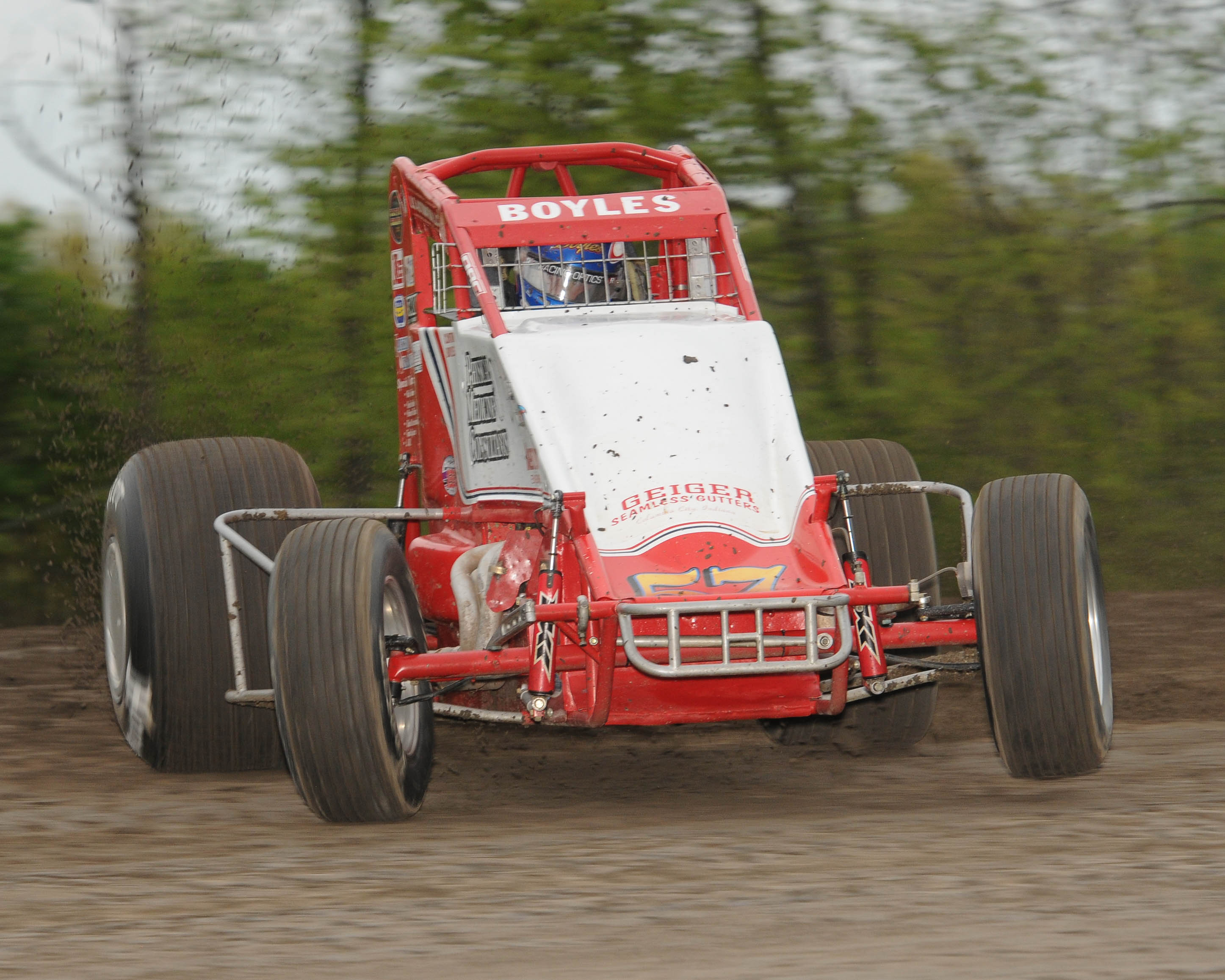 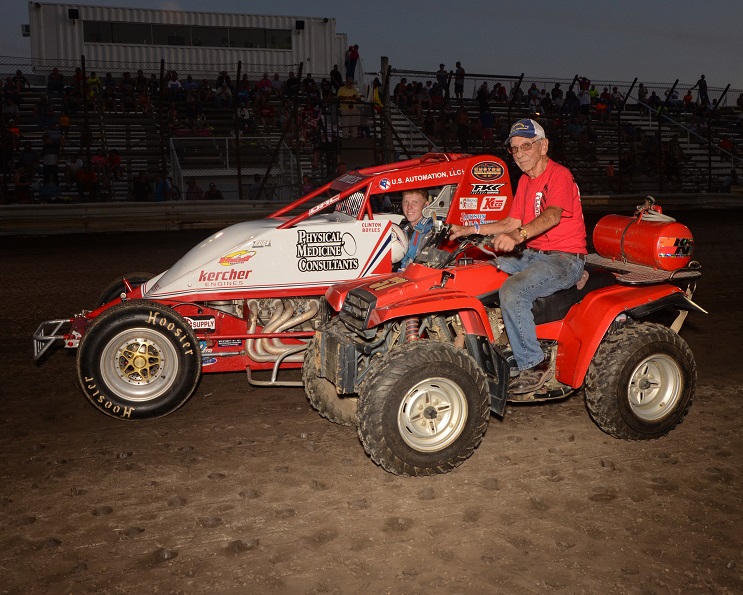 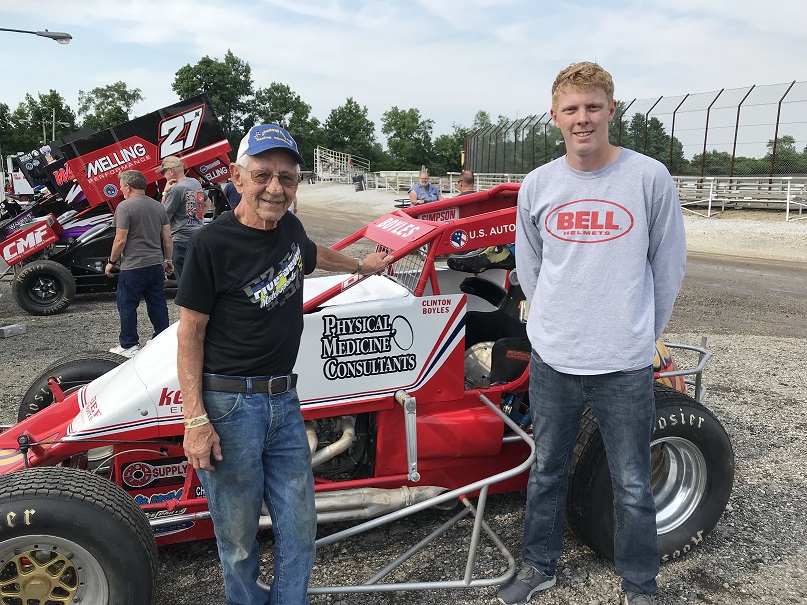 Caption two: Young Clinton Boyles powers through a turn at Gas City I-69 Speedway in a non-wing sprint car owned by Paul Hazen. The pair won the division’s track championship for 2018.

Caption three: Paul Hazen (on four-wheeler beside his sprint car driven by Clinton Boyles at Gas City I-69 Speedway) is legendary in sprint car racing in the Midwest. Many think the Columbia City, Ind. resident should be in the National Sprint Car Hall of Fame.

With Young Boyles at Gas City I-69 Speedway

The suggestion certainly has merit, because Hazen is legendary in sprint car racing in the Midwest. That includes Gas City I-69 Speedway, where the 80-year-old car owner from Columbia City, Ind., won the recently concluded 2018 non-wing sprint car owner championship with his 22-year-old driver champion, Clinton Boyles of Greenwood, Mo.

Hazen is old school, but one can’t dispute his results. Young Boyles won three non-wing sprint car features at Gas City enroute to the track championship in Hazen’s car, which were more victories than any other driver in the hotly contested division.

Although he’s devoted much of his life to the sport, Hazen didn’t come from a racing family.

“I always liked to go fast on the highway, and one day I decided it might be better if I drove fast on the track rather than the road,” he said.

So he started his motorsports career 61 years ago as a driver. “I started in 1957, and drove for the first 10 years,” he said prior to a Friday night race at Gas City’s quarter-mile dirt oval. “I also owned that car. When I drove the cars were called open-wheel modifieds, but they were the beginning of today’s sprint cars. My first race as a driver was at Warsaw, Ind., and I quit driving after I won the Warsaw Speedway point championship.”

The list of Hazen’s drivers since then is impressive.

“There’s about 53 of them,” he said. “I made a list of them once, but it’s at home. Some of them were Scotty Weir, Jim Elliott, Tony Elliott, Jon Stanbrough, Kevin Thomas Jr., Chad Boespflug, Casey Shuman, Thomas Meseraull, Jon Sciscoe and Dave Darland. Others were Jeff Gordon, Stevie Reeves, Johnny Parsons Jr., Kent Christian, Butch Wilkerson, Tracy Hines, Jay Drake, Bryan Clauson, Robbie Stanley, Josh Spencer, Larry Rice, Brian Tyler, Brad Marvel, Sheldon Kinser Jr., Don Hewitt and Shane Cottle. Those are some of the ones I can remember off the top of my head, anyway.”

Along the way his car won the sprint car portion of the Four-Crown Nationals at Eldora (Ohio) Speedway in 1987 with the late Tony Elliott, and the first USAC sprint car race that was televised live, which was in Hinsdale, Ill., the same year.

“I think one of the first two years Gas City was open, we won the championship,” he added. “I think we won it once with Tony Elliott and once with T-Mez [Meseraull].”

He’s won so many track championships as a car owner, he’s lost count. “I know we won the championship at Putnamville and Kokomo,” he offered.

So how did he and Boyles hook up?

“Word of mouth,” Hazen said. “Joe Devin of DRC Chassis put me on to him. This is our first year together.”

What does he look for in a driver?

“He needs to be aggressive, but not over-aggressive,” Hazen said. “Not hard on equipment.”

Hazen puts in “more than a 40-hour week” at his shop in Columbia City, Ind., which is west of Fort Wayne, in order to put a car on the track.

“A couple of guys show up once in a while, but I’m mainly the guy,” he said.

He currently has two sprint cars.

“That’s the most I’ve ever had at one time,” he said. “The second one doesn’t have a motor in it though; it’s just a backup frame.”

Hazen said he likes to spend his Friday nights competing at Gas City. “It’s the closest place to home, and I always enjoyed running here,” he said. “I think Jerry Gappens is doing a tremendous job with it now.”

When chatting with Hazen at his trailer, we noticed a horseshoe nailed to the wall.

“Jon Sciscoe gave me that, when we were having a run of bad luck,” he remembered.

Hazen is aware of the efforts to get him inducted into the National Sprint Car Hall of Fame at Knoxville, but he’s not on social media. In fact, he doesn’t even have an e-mail address.

“I can’t do anything on a computer, but give me two wrenches and I’m happy,” he said with a smile.