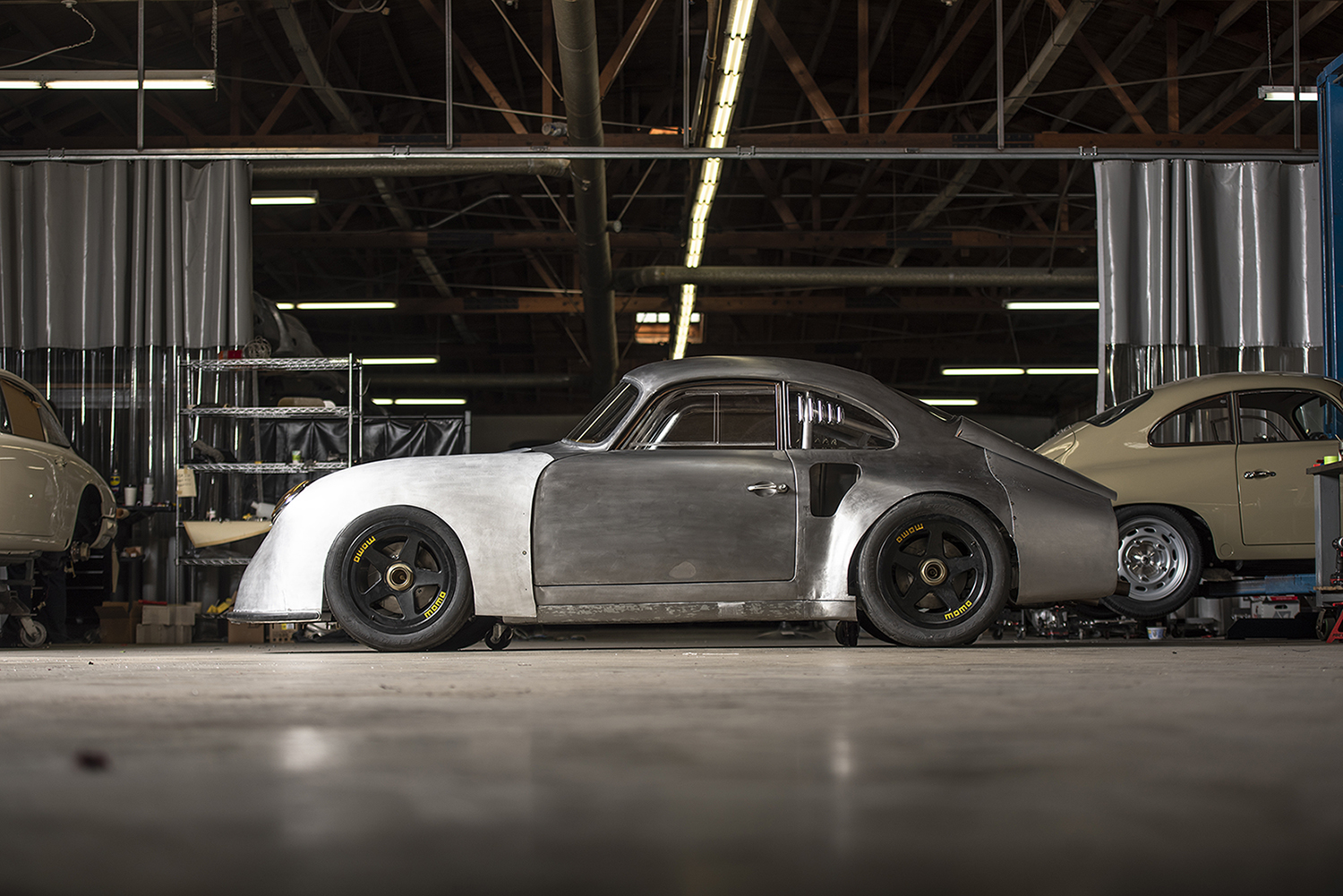 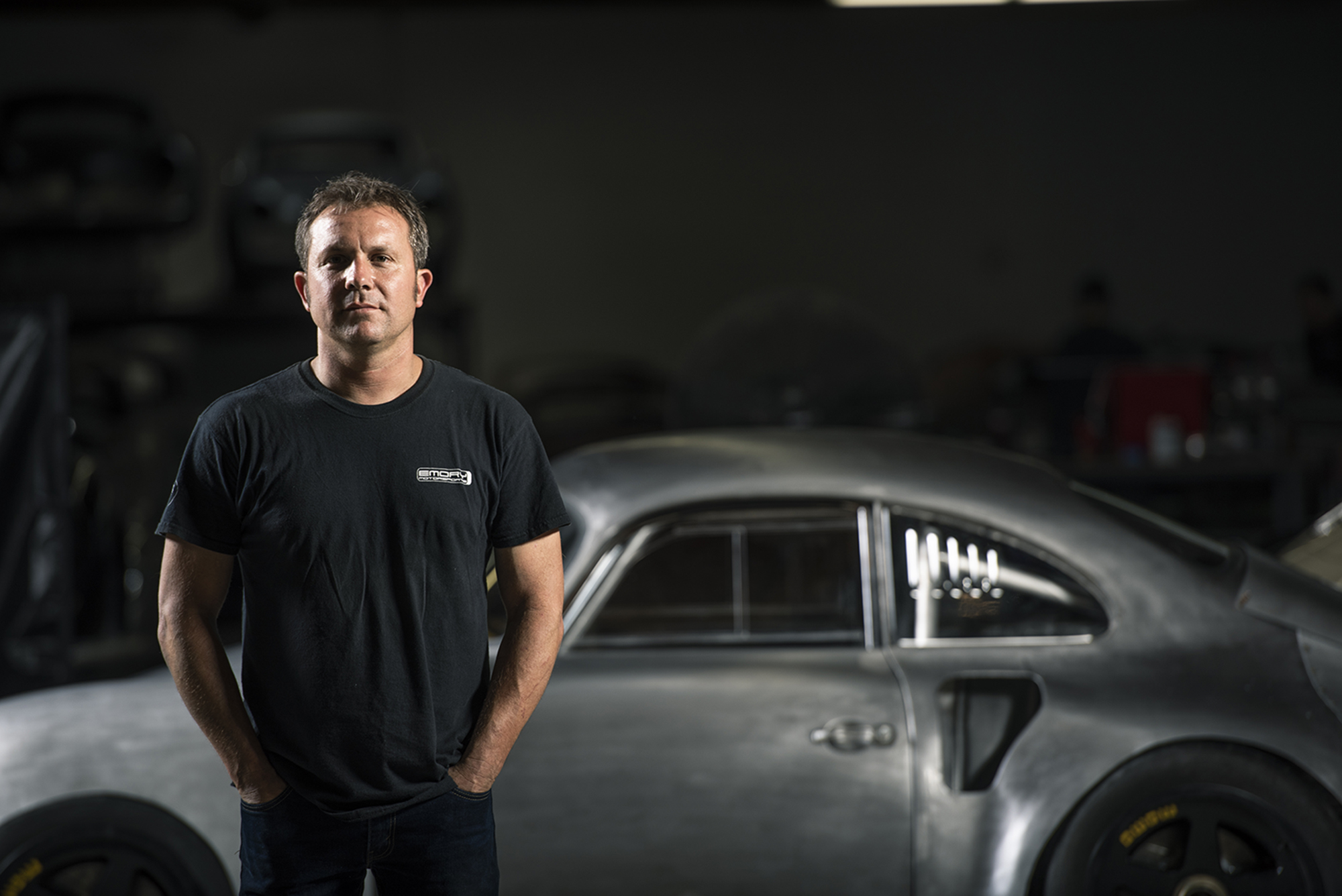 MOMO, in collaboration with Rod Emory at Emory Motorsports, is delighted to unveil the MOMO 356 RSR Outlaw at its public debut at Rennsport Reunion VI at WeatherTech Raceway Laguna Seca. Rennsport Reunion, Porsche’s heritage event, is the perfect backdrop to reveal this project, which honors MOMO’s 50-year history with Porsche enthusiasts.

The concept for this very special sports car dates back to 2012 when Porsche 356 specialist Rod Emory imagined the ultimate 356, one worthy of Porsche’s RSR designation in reference to the legendary 1973 Porsche 911 Carrera RSR. A rendering was posted to social media and led to a call from Henrique Cisneros, Chairman of MOMO Automotive Group in 2014. His aims were clear: “It needed to have cool MOMO wheels and spit flames from the exhaust,” Rod recalled of the conversation.

To initiate the project, MOMO set out to create a new wheel with Rod Emory. It would become the centerpiece of the MOMO 356 RSR Outlaw, drawing inspiration from MOMO’s classic five-spoke centerlock wheels fitted to the Porsche 935 and 962 racecars of the 1970s and ’80s. The result is the MOMO Heritage 5 wheel, which provides a focal point for the MOMO 356 RSR Outlaw.

The wheels measure 17×7” front and 17×8” rear, fitted using original Porsche 911 RSR centerlock hubs. A crowd pleaser since its first public appearance at the 2017 SEMA show, the MOMO Heritage 5 wheel was the basis for the MOMO Heritage 6 wheel launched earlier this year.

Pirelli P Zero Trofeo R tires – the Italian company’s stickiest road-racing compound – were fitted to all four corners, with 225/45 ZR17 specified for the front and 255/40 ZR17 on the rear.

Emory then set about creating the 356 RSR, which would marry the body of a barn-find 1960 Porsche 356B Coupe to the chassis of a 1990 964-type Porsche 911. The latter gave the car the suspension pick up points Rod needed to provide traction and braking for the 2.4L four-cylinder twin-turbo engine developed for the project with Rothsport Racing and TurboKraft. “With its twin Garrett ball-bearing turbos, two small wastegates and straight pipe from the turbos, it’ll spit flames under deceleration like the 935 racers used to,” Rod assured Henrique.

In order to create the new Emory-Rothsport 911/4 twin-turbo engine, Rothsport sand-cast new engine casings and created a custom crankshaft, which was connected to 100mm pistons to achieve the desired displacement. To ensure durability at high RPM, a billet aluminum camshaft housing was machined and fitted with custom Elgin camshafts.

The fuel system comprises a Rothsport individual throttle induction system, which is supplied by a Rothsport custom fuel rail and controlled by a programmable Motec engine management system. The ignition system uses a twin-plug distributor while waste gases are expelled through a Rothsport stainless steel exhaust system fabricated specifically for this application.

With its 935-style boost controller mounted on the dashboard, the engine can be adjusted from 325 to 375hp. In a sub-2000 lb vehicle, the Pirelli tires will undoubtedly be struggling for traction.

The increased performance is balanced by powerful brakes that use a combination of 964 Porsche/Brembo calipers and rotors, fitted to the RSR hubs with custom hats. The suspension utilizes the 964 pick up points and mixes Eisenlohr Racing Products with Tarett Engineering sway bars and KW dampers. The latter provide hydraulic lift to allow the nose to clear steep driveways.

For its Rennsport unveiling the car will be seen in its unpainted form. This will allow interested parties to explore the major bodywork changes made to accommodate both the MOMO wheels and 6×18” intercoolers located within each rear fender well. With its lightweight aluminum nose and tail sections, the 356 RSR has a phenomenal power to weight ratio.

The interior will be finished to honor 1960s Porsche sports cars by incorporating a MOMO Prototipo steering wheel with distressed leather rim on a quick-release MOMO hub. Emory modified a Rothsport shift lever to accept a MOMO Heritage Line Targa shift knob, giving the driver direct access to the G50/03 five-speed transmission and GT limited-slip differential. A set of MOMO pedals were also custom-made for the project, machined from aircraft-grade 6061 aluminum.

The custom-built seats are based on the original 911 Carrera RSR design with a “sprinkle of 908 thrown in,” according to Emory. They were trimmed in fire-retardant red cloth, inspired by the Porsche 908 and 917 racecars, and create a stark contrast to the surrounding metalwork.

“I couldn’t be more delighted with how the car is coming together,” said Henrique Cisneros. “We chose to work with Rod because of his incredible reputation, impeccable crasftmanship and dedication to detail. We knew he would be the best person to build a special vehicle that would truly represents the MOMO brand by merging high performance with distinctive design.”

Rod Emory is most enthusiastic about being able to transform his wildest imagination into a reality. “I’m so excited to see how everything is coming together on this build,” said Emory. “I’ve always got so many ideas rolling around my head and this is easily the wildest 356 we’ve built to date, truly living up to the Outlaws brand we created.”

The MOMO 356 RSR Outlaw by Emory Motorsports debuts at Rennsport Reunion VI where enthusiasts will be able to see it in the MOMO booth. The car will appear at other events including SEMA 2018, where it will showcase MOMO products and promote the brand.

ABOUT EMORY MOTORSPORTS
Founded in 1996 by Rod and Amy Emory, Emory Motorsports is a full service vintage Porsche Restoration company with a few simple goals: to build the most iconic, yet personalized Porsche 356s on the planet, and to deliver a customer experience unlike any other in the Porsche marketplace.

Each Emory Motorsports car is tailored to the owner’s specific tastes and requirements. Emory Motorsports is not in the stock restoration business. Each original Porsche is restored to better-than-factory standards from its metal unibody and exterior to its mechanicals and interior. To learn more, please visit www.emorymotorsports.com

ABOUT MOMO
Founded in 1964 by racecar driver Gianpiero Moretti, MOMO was one of the first to introduce customized steering wheels into motorsports and the aftermarket. Headquartered in Milan, Italy, MOMO has grown its product line to motorsports, tuning and safety, road wheels, tires, shift knobs and steering wheels. With more than 50 years of heritage, MOMO has become one of the best-known motorsports brands around the globe. MOMO and MOMO Tires are part of the Cisneros Corporation. To learn more, please visit www.momo.com