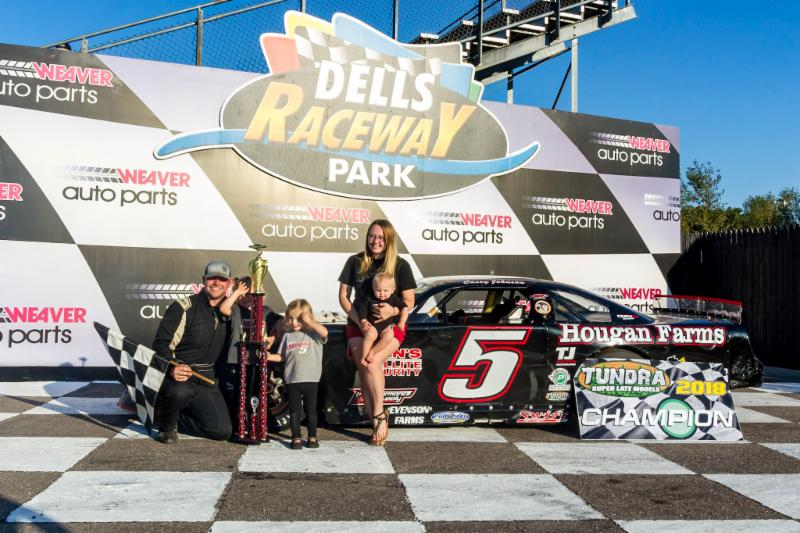 WISCONSIN DELLS, Wis. (September 23, 2018) – It was nearly impossible to predict just how

Sunday’s TUNDRA Super Late Model Series Round Six Powered by Wisconsin Potatoes would play out at Dells Raceway Park.  In the end some familiar names – and one that will be familiar soon – found their own ways to highlight a spectacular day.

Casey Johnson picked up finishes of Fourth and Second in the twin 55-lap features to secure his second TUNDRA Championship.  Mike Lichtfeld scored a much-coveted win at his home track in the first 55 and Carson Kvapil became the youngest winner in series history by capturing the second 55.  Kvapil also set fast time.

While the 55 lappers had plenty of twists and turns of their own, the main plot point of the day was an intense Championship battle.  Nine drivers were separated by just 55 points.  With qualifying and two features – awarding full points – there was plenty of opportunity for drivers to move about the standings.

Johnson took advantage of qualifying points as he had throughout the season.  With just he and Lichtfeld scoring points by timing into the Top Five, Johnson took a three-point lead over his teammate John Beale heading into the first feature.

Colin Reffner, who entered the day just 19 points out of the top point position, led the field to green alongside Andy Jones.  Jones provided a stout opposition for Reffner but could not fend off the second-year TUNDRA racer.  Reffner secured the lead from the outset and attempted to build a lead.  Behind Reffner and Jones the action was furious among Lichtfeld, Ryan Farrell, and Rich Schumann Jr.  Schumann and Farrell made contact but were able to avoid a melee.  However, this allowed Lichtfeld to slip into Third and set his sights on the Top Two.

Just before lap 10 Lichtfeld moved to the inside of Jones and secured Second.  The timing was perfect for him as the lone caution fell shortly after when Brent Strelka experienced a mechanical issue.

Lichtfeld elected to use the outside lane for the restart.  After a three-lap, side-by-side duel, he was able to grab the lead from Reffner.  Behind the lead duo Farrell, Johnson, Kvapil, Bobby Kendall and John Beale looked to work into the Top Five.

Farrell surged to Third on lap 12 and looked to reel in the leaders.  Just past the midway point

Johnson would grab Fourth from Jones and look to challenge Farrell, but to no avail.  Behind him Beale was making a steady climb.  From the 11th starting spot Beale was able to climb to Fifth, gaining him bonus points for passing the most cars.

Lichtfeld cruised through lap traffic after seizing the lead on the restart although Reffner chewed away at the disadvantage late.  Reffner would settle for Second, Farrell Third, Johnson Fourth and Beale Fifth.

After the first feature, Johnson led Beale by five with Reffner Third, just 12 points back.  Lichtfeld made up a ton of ground on the leaders and climbed from Seventh to Fourth in the standings, just 17 points back.

An invert of seven placed Bobby Kendall and Kvapil on the front row for the second 55.  Kendall enjoyed an early advantage but could not shake Kvapil.  While those two raced in close quarters, Beale and Johnson were in hot pursuit running Third and Fourth.  Through the first half of the race, Beale and Johnson were tied in the Championship standings.  Once the cautions fell, things began to shake up.

Kvapil took the lead back from Kendall on a restart on lap 27.  When Kendall slipped to the top groove, Beale capitalized and stole Second, leaving Johnson in Fourth.  The spread was enough to put Beale back on top of the standings.  Johnson furiously tested Kendall to try to take Third away.  The move would have been good enough to give him the title lead back.  However, a caution for an incident involving Jordan DeVoy and Frank Nitzke would reset things again.

Beale elected to hold the inside line with Johnson behind.  This left the outside line of the front row for Kendall and the outside of Beale for Farrell.  Kendall slipped back into the Second spot, and Farrell challenged to the outside.  He nipped Beale and the line for Third with 24 laps remaining.  When a caution fell for an incident between Lichtfeld and Justin Mondeik, it was Farrell who was Third with Beale and Johnson behind.

The front row composed of Kvapil and Kendall once again, but this time it was Farrell and Johnson in row two as Johnson elected the outside lane. Beale restarted inside row three.  Kvapil ran away from the pack in a hurry and the outside line opened for Johnson.  He quickly moved past Farrell, then stole Second from Kendall.  Beale put the pressure on Farrell in hopes of making a late-race run but could not charge any further forward.

As Kvapil ran out front, Johnson started to close the gap.  With a Championship and overall day’s win in hand, Johnson got to the bumper of Kvapil, but was not able to snatch the win away from the young driver.  Kendall held off Farrell for Third, and Beale rounded out the Top Five.

With the consistent day’s runs Johnson surged to 19-point win in the Championship standings. He previously won the title in 2016. Beale was Second to his teammate and Crew Chief.  Reffner finished Third, Mike Lichtfeld climbed to Fourth, and Justin Mondeik rounded out the Top Five in the season standings.

Despite an up-and-down day, Gabe Sommers held on for Seventh in the season standings and was declared the 2018 Back 40 Wraps TUNDRA Rookie of the Year.

Although both features awarded points, there were bonuses for the Top Ten overall.  Those drivers were:

Plans for the 2019 TUNDRA season will be announced in the coming months.