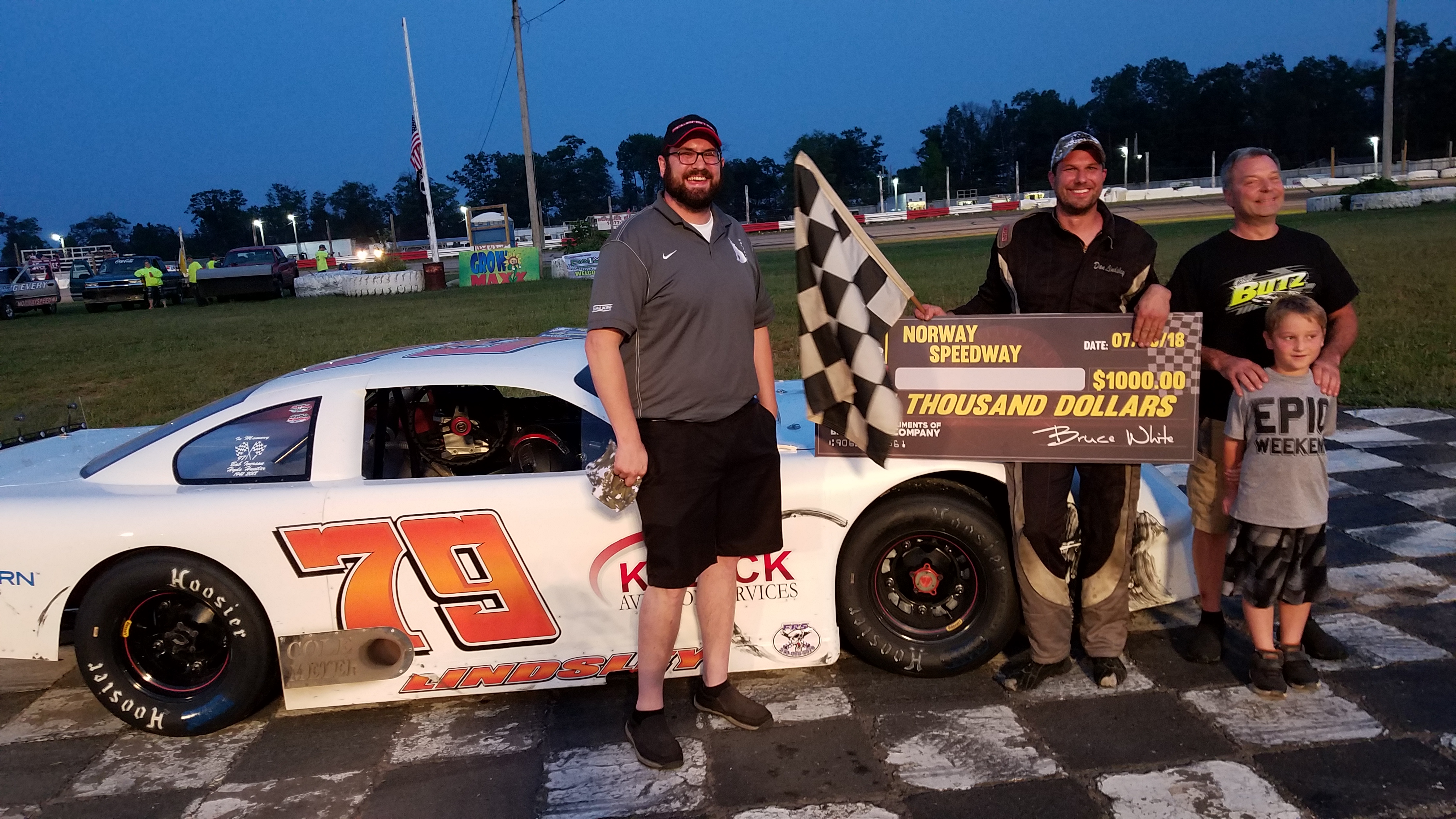 The victory was Lindsley’s second of the season.

Lindsley started 10th on the grid, and it was Vulcan’s Kris Kelly snatching the lead from Bark River’s Tom Lindquist on lap three. Kelly kept the lead through a few caution periods. By lap 20 Lindsley had sifted through the field, picking up enough spots to get to second. One circuit later Kelly spun after having contact with another car. Kelly “tapped out” admitting fault in the caution. By doing so that handed the lead to Lindsley.

Lindsley kept a steady pace and all challengers at bay to score the victory. Point leader Dillion Kralovetz scored second, followed by Lindquist and Robby Iverson. Kelly rebounded after the early race yellow to pick up a fifth place finish.

Jeff Schettler scored a popular win in the 141 Auto sportsman division while Jake Dolfurd captured an entertaining stock four feature win, as he and Cody Skog entertained the crowd weaving in and out of lapped traffic while trading the lead.

Before the races began a brief ceremony took place prior to the national anthem to honor Doug Rose. The driver of the World famous “Green Mamba Jet” succumbed to injuries at the track the night prior in an exhibition run after his car crashed and flipped in turn one.

There will be no racing on Friday, August 24. The Impact Survival Series (ISS) will race at the track Saturday, August 25 beginning at 6 p.m.

A Labor day weekend doubleheader of racing is on tap during the Dickinson County Fair. Friday night, August 31 a full racing program will take place, including spectator eliminator races. Sunday, September 1 another full racing program will take place, with a $1,000 top prize being awarded to the late model feature winner. Sport trucks will also be on hand.

Four champions will be crowned “Fair Champions” with combined points being tallied up between the two nights of racing. $1,000 will be awarded to the Coca Cola late model champion – $500 to the Auto Value series champion and $100 apiece to both the 141 Auto Sportsman and stock four champions, respectively.

on Friday night with a 4 p.m. start time on Sunday.