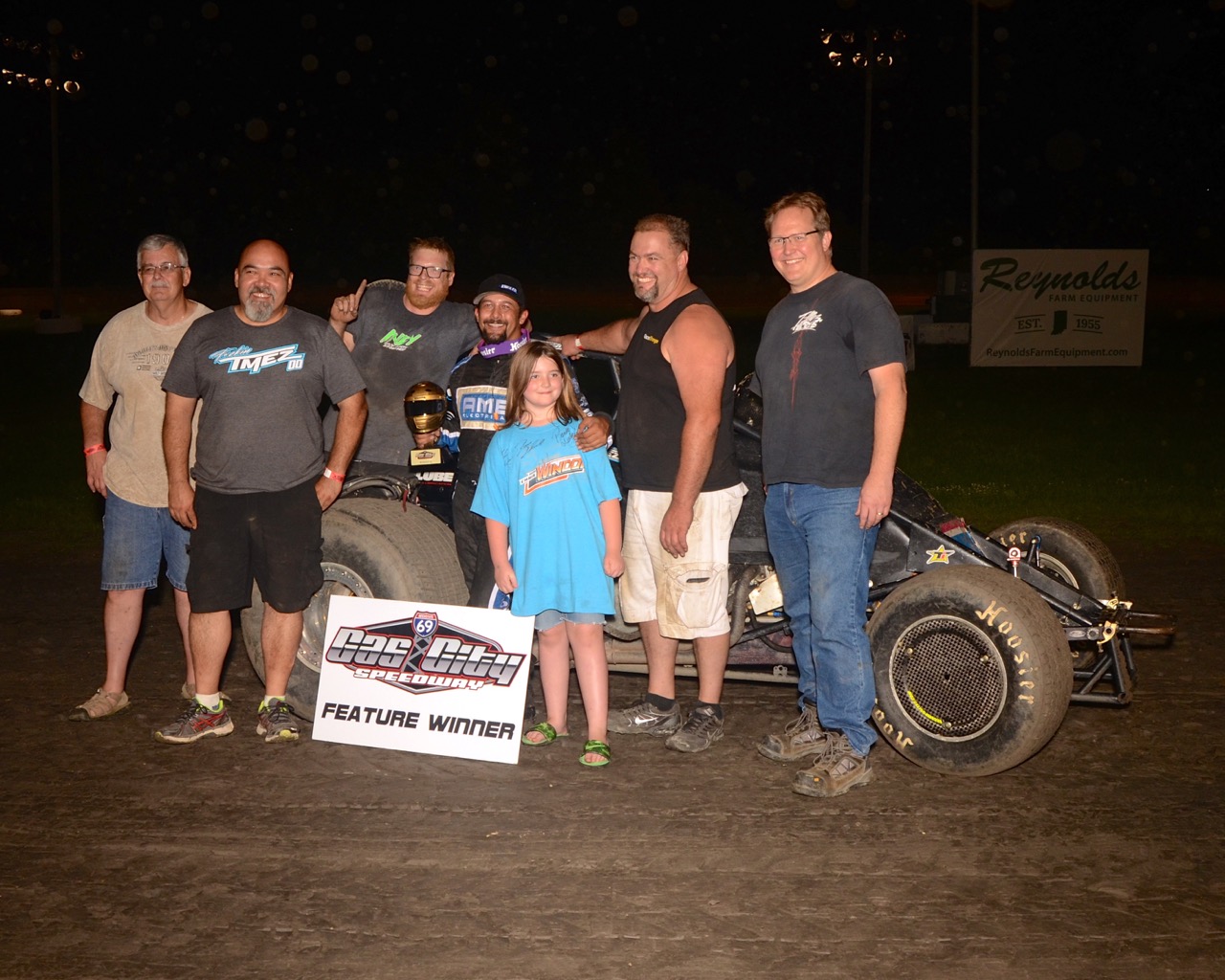 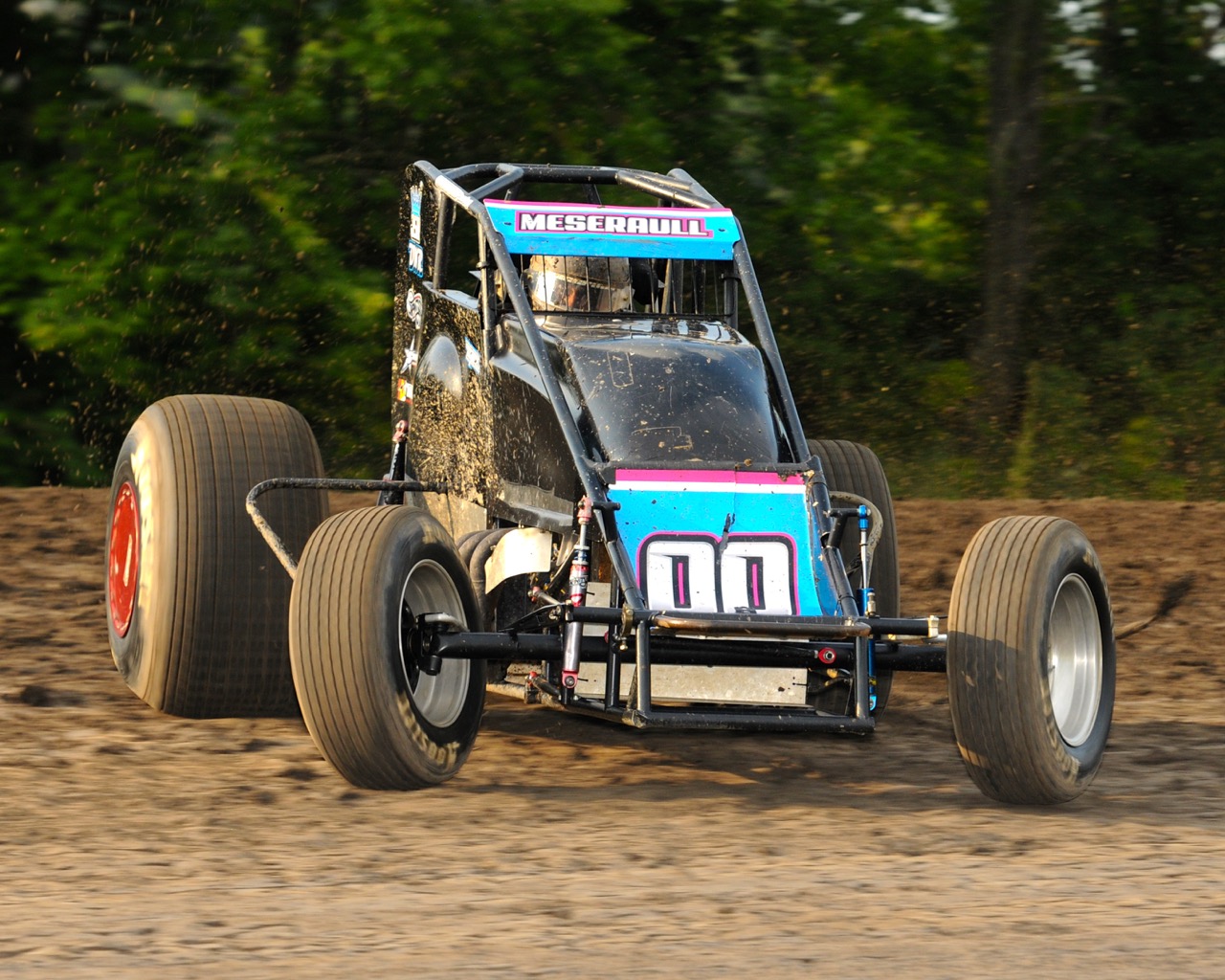 Meseraull Gets an A+ and Wins

GAS CITY, Ind., Aug. 4 — In front of the largest crowd so far this year at Gas City I-69 Speedway, Thomas Meseraull of Waveland, Ind., started second, went to the head of the class on the second lap, and stayed there to win a fast and furious, non-stop, 25-lap non-wing sprint car feature Friday night as the highlight of the Thompson Trucking and Equipment-sponsored “Back-to-School Bash.”

Bub Roberts of Warren, Ind. won his first 20-lap UMP modified feature of the year at the quarter-mile dirt oval.

John and Sherril Long, owners of One More Time Motorsports, posted an extra $1,000 in purses for the 15-lap thunder car and front-wheel-drive compact features, which were won by Ervin Turner of Marion, Ind. and Josh Gamblin of Kokomo, Ind., respectively.

In the wildest and most spectacular event of the night, Jim Ashton of Anderson, Ind., won the first school bus race in the track’s history during intermission.

Meseraull, aka “T-Mez,” had things well in hand in Don Whitney Racing’s No. 00, which is a Hawk chassis sponsored by Physical Medicine Consultants and Infinity Shocks and powered by a Stensland-prepped engine. He had a healthy lead over Dallas Hewitt, who started right behind him, at the checkered. The battle for third was the barnburner. In the end Shane Cottle took the position over Dave Darland and Shane Cockrum. It was the second victory of the year for Meseraull at the popular track in a show that finished before 11:30 p.m. despite presenting six classes of competition featuring 104 cars.

Gehrke started on the pole of the midget feature with Stratton Briggs alongside him. Briggs, who won the other D2 midget feature here in June, grabbed the initial lead but got out of shape on the backstretch on the first lap. Gehrke capitalized and went on to lead every lap despite several yellows and a red that tightened up the field. The red was for Tayte Williamson, who flipped in Turn 4 with 18 laps down but was unhurt. Aaron Leffel finished second and Brad Strunk came from tenth to finish third. Cory Guingrich passed Briggs on the last lap for fifth.

Mark Nieft Jr. flipped between Turns 1 and 2 in the third midget heat but got out of his car under his own power.

Hedrick, a deputy for the Rush County Sheriff’s Department, took no prisoners and led every lap of the TQ midget feature from the pole to extend his UMRA point lead. Trailing Hedrick’s No. 33, which is sponsored by INTAT Precision, Rush Memorial Hospital and L & S Sanitation Service, were Joey Paxson, Tate Martz, Robbie Roland and Matt Lux.

Nelson Stewart, father of racing superstar Tony Stewart, flipped in Turn 4 with 11 laps down but climbed out unhurt, signed a release waiver for the ambulance crew, and soldiered on to finish 14th after the wrecker crew got his TQ back on all four wheels.

Roberts started on the pole of the modified feature and fought off all his rivals despite six cautions that tightened up the field. Trailing Roberts, whose car is supported by Zeller Construction, Brickley Construction and Wesco Farms, were Daniel Russell, Jamie Lomax, Bradley Jameson and Dillon Nusbaum.

Thunder car point leader D.J. Holt flipped in Turn 4 with seven laps down in that feature while battling for the lead. With only two laps to go Braxton Strait did that move one better when his car caught on fire after he flipped in about the same spot. Neither was hurt. By the time Strait’s accident was cleaned up the race’s time limit had been reached, and Turner was declared the winner over Justin Wheeler, Greg Long, Bryce Krider and Strait.

Gamblin started on the pole and led all 15 laps of the FWD compact feature. Gage Allen was on his car’s rear bumper at the finish, while Brandon Nutter placed third. Eric Solms’ Silver Bullet spun to a stop in front of the flagstand on the first lap but he came back to finish fourth. James Headley Jr. rounded out the top five.