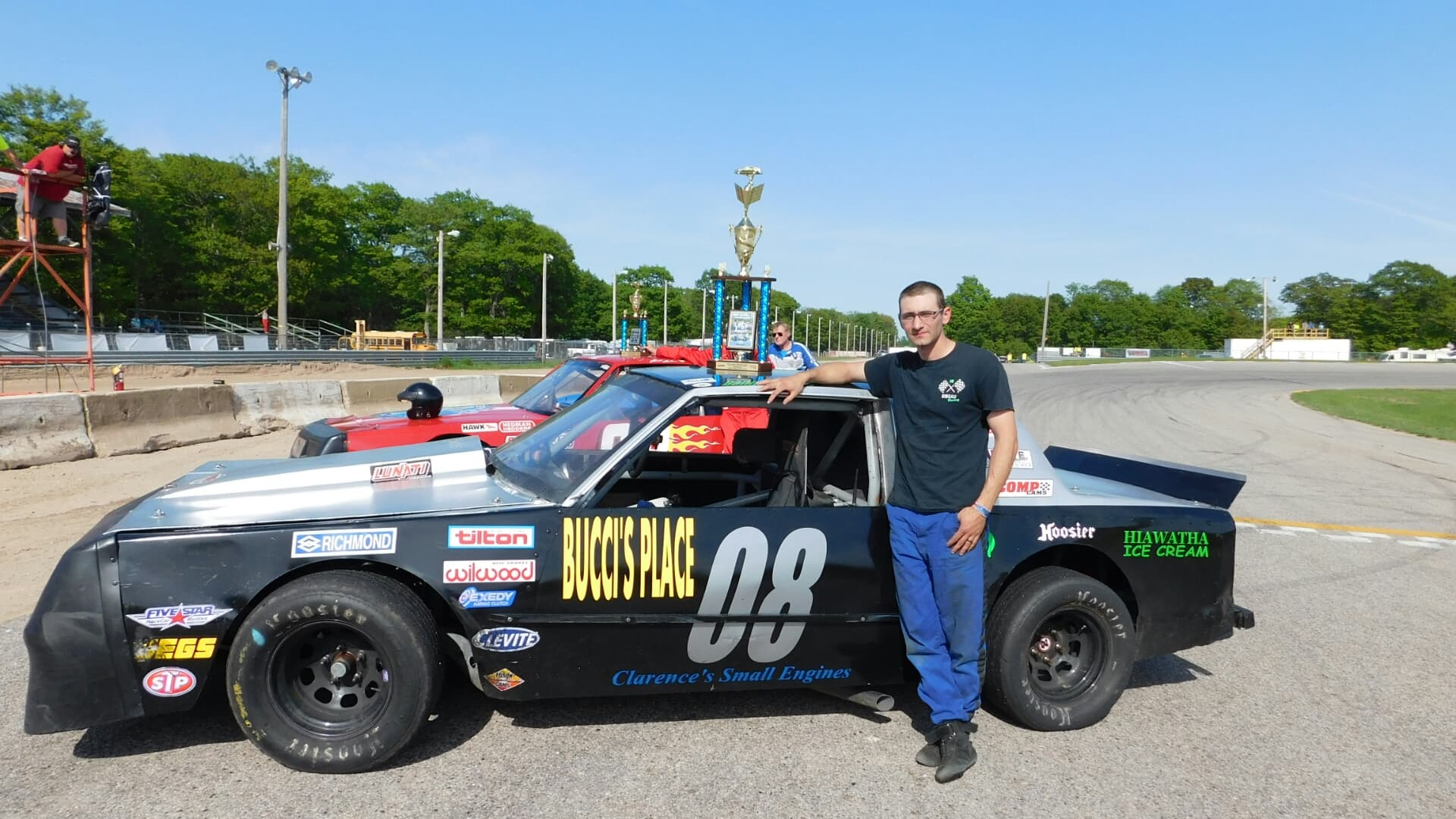 Ideal warm and sunny conditions greeted competitors and fans this past weekend as the Kinross Speedpark kicked off their 2018 stock car racing season with the “Blue Deuce” John Lowery II Tribute Event.

The special Saturday event paid tribute to former competitor John Lowery II whom our racing community lost following a courageous battle with cancer this past August.

An emotional afternoon was filled with memories both on and off the track.

In the first segment Scott Juday (#38, Boyne Falls MI) led the field to the green flag before leading the four of the first five laps of the event.

Defending track champion Buddy Palahunk (#26B, Goulais River ON) led the next ten laps before being overtaken on lap 16 by the first segment winner, Brad Bibeau (#08, Sault Ste. Marie, ON).

By virtue of the first segment lead, Bibeau would start the final 22-laps from the number one position and led the opening four laps before a flat tire retired him pitside while his quick crew would be able to return him back to the track under yellow flag conditions.

Gerald Archer (#88, Goulais River ON) inherited the lead and held that position until nine laps to go before Bibeau made the pass to the inside and complete the comeback to capture the checkered flag and the hardware to go along with the victory.

Archer finished second while John Lowery, racing in memory of his son and the events honouree, was hard charging going from the back and finishing off the final podium position.

Seven stout ABC Stock Car A-Division cars opened the season on the premises and after 2016 Track Champion Keenan Spurway (#0, Sault Ste. Marie ON) led the opening lap of their feature event, Grant Howard (#19 Petoskey, MI) led the rest of the way in an emotional victory as Spurway and Brandon Carson (#54, Petoskey, MI) rounded out the top 3.

Howard started the night with the four car dash win, while Spurway picked up his first win of the season in the heat race.

It was a night of firsts in the track’s premiere division, the Modifieds.

An altercation on the final lap saw Uhlman lead the final lap of the event to find victory lane followed by Mark Laakso (#84, Sault Ste. Marie ON) and Buddy Gray IV (#24JR, Petoskey, MI) rounding out the top three.

While in the Four Cylinder Division, defending track champion Brent Fewchuk (#3, Sault Ste. Marie ON) started off the new season where he finished off one summer ago.

Following a victory by his sister, and last year’s runner-up, Rebecca Fewchuk (#99, Sault Ste. Marie ON) in the four car dash, Brent followed that up with the heat and feature wins.

Kinross will now take a week off before returning to action on their traditional Sunday afternoon for Event #2, the 2nd Annual Triple Crown event on Sunday, June 24th.

The afternoon will feature a full show of Modifieds, ABC Stock Cars and Four Cylinders while competitors from the Norway Speedway (Norway, MI) and Sands Speedway (Marquette, MI) will make the trek east along with the Sportsmen Division.

Qualifying is set for 1 PM with racing action at 3 PM.