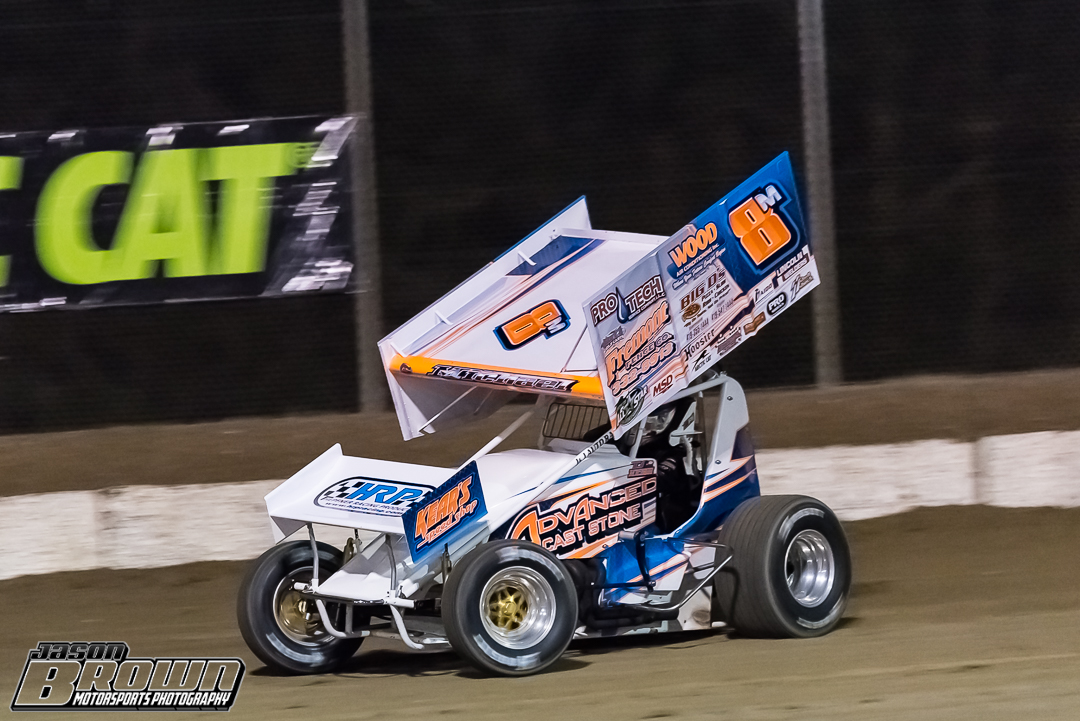 FREMONT, Ohio (June 4, 2018) – The “Texas Traveler” T.J. Michael continued his FAST Series top-ten streak during the recent weekend, not only securing a pair of top-ten performances during action at Attica Raceway Park and Fremont Speedway, but doing so from deep within the fields. Michael, a former All Star full-timer who has since switched focus to FAST action, rallied a grand total of 19 positions during the recent weekend, also solidifying a hard charger award at the home of “Ohio’s Finest Racing.”

“We are starting to get rolling now,” Michael said, driver of the Michael Motorsports/Advanced Cast Stone/Fremont Fence Company/Crown Battery/Kear’s Speed Shop/Hinchman Suits/Big D’s Pizza of Fremont and Clyde/Kistler Racing Engines/Maxim Chassis/Wood Heating & Air Conditioning/Pro Tech Service Company/Wings Unlimited/Shell Shock/No. 8M sprint car. “I’m proud of this team and what we’ve been accomplishing. We are racing against some stout competition each and every week. It is obvious that it is only making us better. We have a ton of racing on deck the next few weeks. Hopefully we can keep this streak going.”

Michael kicked-off the recent weekend with an eighth place finish at Attica Raceway Park on Friday, June 1. Forced to start 19th after finishing sixth during his respective heat race, Michael mounted a massive charge during the 30-lapper, also securing hard charger honors in the process.

In similar fashion, Michael climbed through the field during feature competition at Fremont Speedway on Saturday, June 2, this time climbing forward from the outside of row nine to finish tenth.

Michael will continue his 2018 campaign by returning to Attica Raceway Park and Fremont Speedway on Friday and Saturday, June 8-9. Friday’s program at Attica will accumulate FAST Series championship points.

“I can’t thank everyone enough for their hard work and support,” Michael continued. “It takes a lot of work and dedication to keep these cars maintained and race ready. I appreciate the effort.”

SOCIAL MEDIA:
Keep up with T.J. Michael during his entire campaign right here at the official online home of Fully Injected Motorsports – www.FullyInjected.com. Be sure to follow Michael on all of the available social media networks including Twitter: @TJMichael8.

STATS:
2016 Highlights: Earned a pair of top-ten finishes on June 10/11 with FAST Series and Arctic Cat All Star Circuit of Champions. Michael finished fifth with FAST on Friday, June 10, at Attica Raceway Park, followed by a sixth place finish at Butler Speedway in Butler, Michigan, with Arctic Cat All Stars on Saturday, June 11.

2018 Highlights: Earned a pair of top-ten finishes with OVSCA on Friday and Saturday, May 11-12; fifth at Hilltop Speedway (Millersburg, Ohio) and seventh at Wayne County (Ohio) Speedway. Earned top-ten (6th) finish with FAST Series at Fremont Speedway on Saturday, May 26. Charged from 19th to finish eighth at Attica on Friday, June 1, followed by a charge from 18th to finish 10th at Fremont on Saturday, June 2.