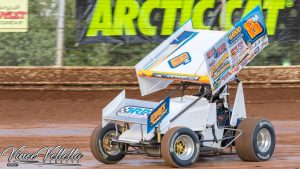 Brad Doty Classic up next for the “Texas Traveler”

FREMONT, OH (July 10, 2017) – The “Texas Traveler” T.J. Michael has been busy during the last several weeks, and despite a break in his Arctic Cat All Star Circuit of Champions schedule, Michael will not rest, but instead join the World of Outlaws Craftsman Sprint Car Series for the annual Brad Doty Classic at Attica (OH) Raceway Park on Tuesday, July 11.

Michael, pilot of the Michael Motorsports/Advanced Cast Stone/Fremont Fence Company/Kear’s Speed Shop/Shell Shock/Hinchman Suits/Big D’s Pizza of Fremont and Clyde/Crown Battery/No. 8M, has yet to join the Greatest Show On Dirt in 2017, but is excited to battle with the best in the world at a facility where he has been victorious.

Michael will enter competition on Tuesday with one recent start to his credit, joining the Arctic Cat All Star Circuit of Champions at Sharon (OH) Speedway for the 9th Annual Lou Blaney Memorial on Saturday, July 8. The Plano, Texas, native finished 16th during main event competition, qualifying for the $5,000-to-win program through his respective heat race.

Including recent results, Michael is currently sixth in the Arctic Cat All Star championship chase, earning 18 main event starts, as well as one top-ten finish.

Keep up with T.J. Michael during his entire campaign right here at the official online home of Fully Injected Motorsports – www.FullyInjected.com. Be sure to follow Michael on all of the available social media networks including Twitter: @TJMichael8.

2016 Highlights: Earned a pair of top-ten finishes on June 10/11 with FAST Series and Arctic Cat All Star Circuit of Champions. Michael finished fifth with FAST on Friday, June 10, at Attica Raceway Park, followed by a sixth place finish at Butler Speedway in Butler, Michigan, with Arctic Cat All Stars on Saturday, June 11.