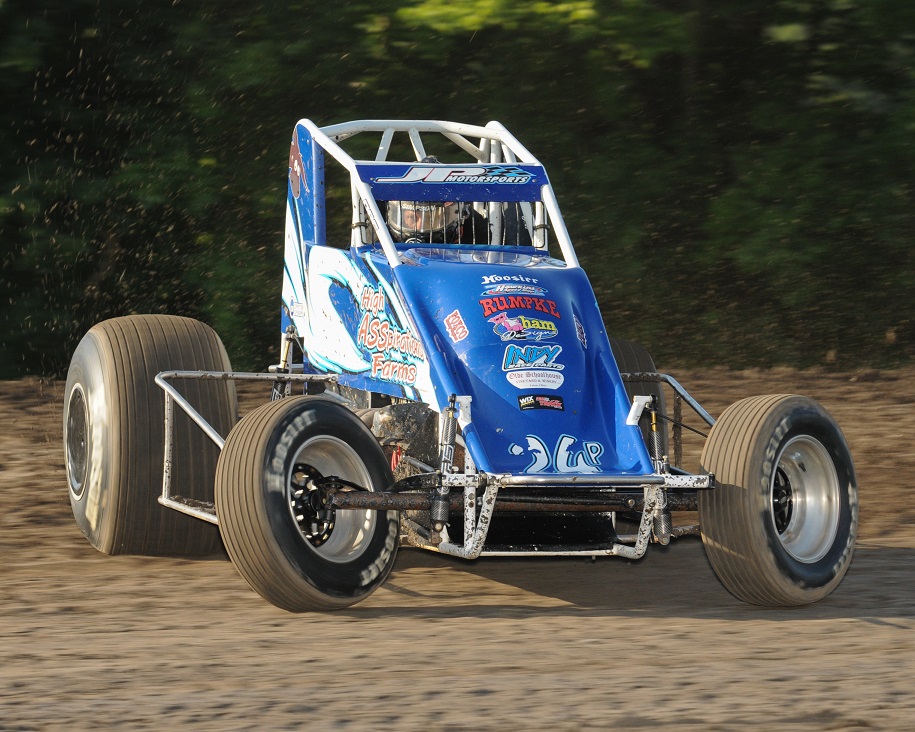 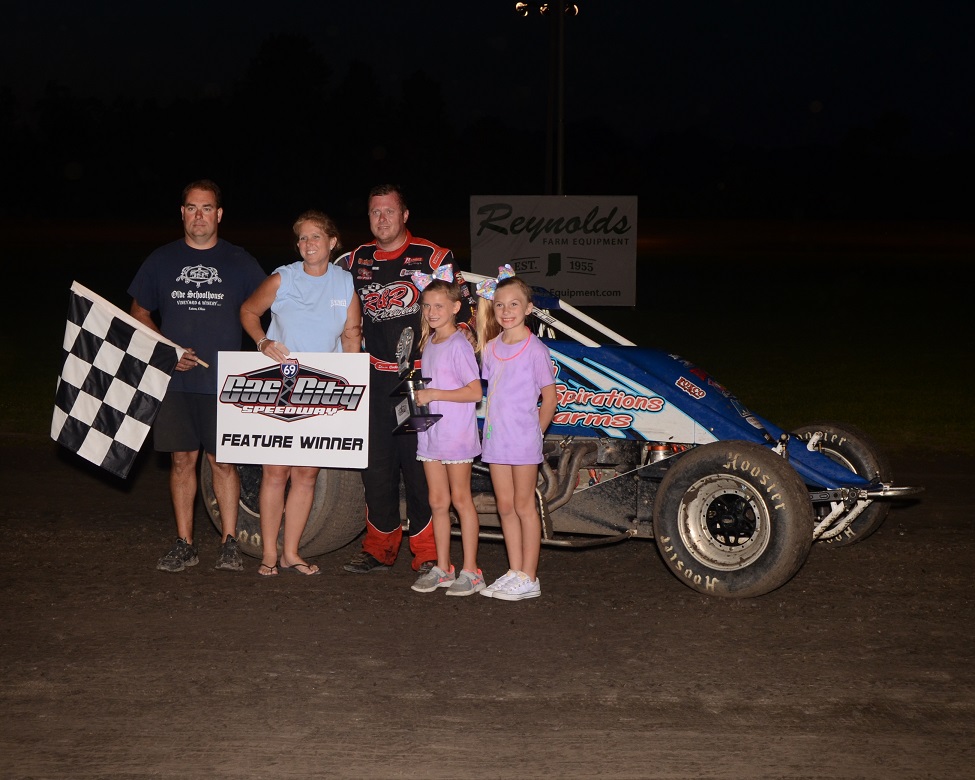 For more information:
Linda Mansfield, Restart Communications
E-mail: LKMRestart@gmail.com
Cell: (317) 201-0729
(The release is attached as a Word docx and as a pdf file. Two photos of Cockrum are also attached.)

GAS CITY, Ind., July 14 — Shane Cockrum of Benton, Ill. became the seventh different non-wing sprint car feature winner so far this season Friday night at Gas City I-69 Speedway during the Mid-Season Showdown, which had a “Christmas in July” theme. The Thunder Car Rumble ran true to its billing, as both the front and the rear of Jimmy Watters’ car were damaged but the Montpelier, Ind.-driver still became the fifth different winner in that division in 2018 and took the $700 top prize for that special race. Zeke McKenzie of Claypool, Ind. posted his third UMP modified feature victory of the year at the quarter-mile dirt oval, while Alyssa Clark of Columbia City, Ind. won the front-wheel drive feature for her first feature victory at Gas City this season.

Cockrum’s victory in the 25-lap sprint car feature was vindication for his efforts here on June 29, when he finished third by inches to winner C.J. Leary and runner-up Matt Westfall. This time the “Flying Fireman” started second and led every lap in Jamie and Michelle Paul’s High Asspirations Farms DRC No. 24P, which is based in Eaton, Ohio. Young Evan Mosley of Lapel, Ind. started fifth and finished second, while polesitter Ted Hines of New Castle, Ind. placed third. Braydan Willmington of Marulan, New South Wales, Australia placed fourth in only his second weekend racing a non-wing sprint car, while Cole Ketcham of Muncie, Ind. rounded out the top five.

Tyler Hewitt, Bryar Schroeter and Tony Main tangled in Turn 2 to cause a complete restart at the beginning of the race, but all three were able to restart. Point leader Clinton Boyles ran third in the early going, despite hitting Hines, who was second, in the rear on the backstretch on lap seven. Boyles passed Hines for second by slipping under him in Turn 1 with eight laps down, but had to give the position back when Parker Frederickson brought out the second caution when he stopped on the backstretch a few seconds later. On the ensuing restart Boyles went for a wild ride when he flipped very hard and high in Turn 4 to bring out a red flag. Luckily he got out of his wrecked car under his own power. As soon as the yellow waved for the field to get back underway, Adam Byrkett, who would have lined up third with Boyles’ retirement, gave up that position to report to the work area, although he returned to the rear of the field before the green waved again. One more yellow waved with 11 laps down when Brandon Mattox spun between Turns 3 and 4. Cockrum had his hands full getting through lapped traffic, but continued unabated for the victory. Mosley was fourth with five laps to go, but he passed Willmington on lap 19 for third and Hines for second on lap 22. Hines and Willmington were still duking it out on the white-flag lap, with Hines holding on for third.

Polesitter James Headley led the first 17 laps of the 20-lap Thunder Car Rumble until he was hit and rolled to a stop in the infield. That gave the lead to Watters, who had started tenth. He led the rest of the way to post the victory with his No. 2, which is sponsored by the Hoosier Pearl Company. D.J. Holt finished second with his Holt Auto Body No. 36, while Ron Flaugh finished third in the No. 5F sponsored by OJC Trucking. Kevin Kerlin and Braxton Strait finished fourth and fifth in the 22-car field.

McKenzie started fourth in the 20-lap UMP modified feature, took the lead from polesitter Bradley Jameson with a move to the outside coming out of Turn 4 on lap three, and won handily with his BZ Miller Farms No. 24. There was a big battle at the end for second between Garrett Jameson and Bub Roberts, who finished in that order. Two cars numbered 17 rounded out the top five, with Dillon Nusbaum fourth in the No. 17N and Michael Tarlton fifth in the No. 17T.

Clark started on the pole for the 15-lap FWD compact feature and led every lap in her No. 02, which is sponsored in part by URBTECH and Jerry’s Tire. Gage Allen finished second with Eric Solms’ Silver Bullet on his back bumper. James Headley Jr. and Randy Brommer rounded out the top five in the final race of a well-run program that ended at 10:20 p.m.

A highlight of the “Christmas in July” show was the appearance of a special guest from the North Pole, as Santa Claus distributed gifts to the kids as part of the opening ceremonies. During intermission the thunder car drivers threw Gas City Frisbees into the grandstands, many of which had gift cards taped to the underside.

Gas City will be dark for the next two Friday nights but will be back in action on Aug. 3, 17 and 31. The USAC AMSOIL national sprint cars and the USSA Kenyon midgets visit Gas City on Sept. 7 in a card that includes three additional divisions, and the season concludes on Sept. 28 with the James Dean Classic.