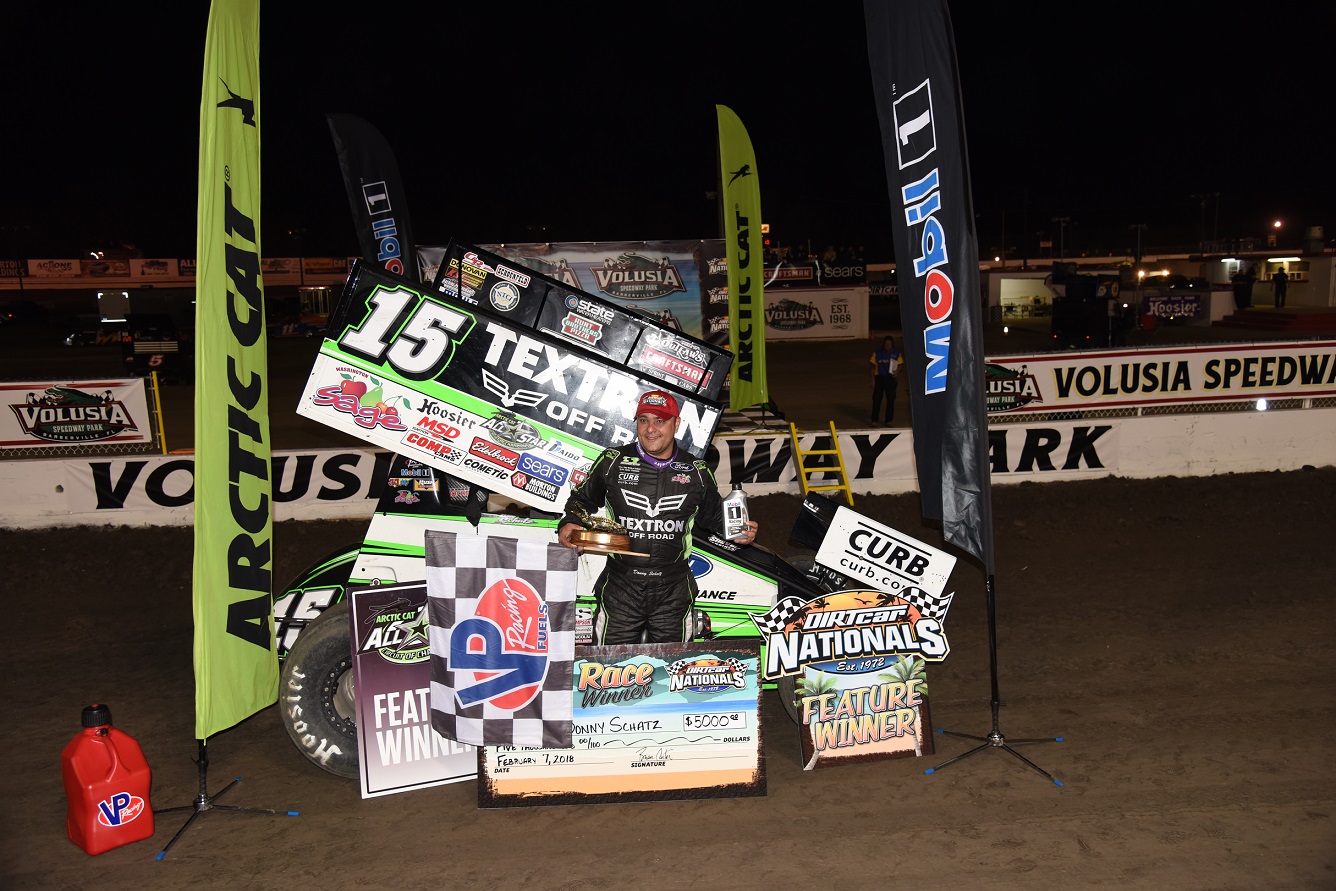 BROWNSBURG, Ind. (June 12, 2018) – Donny Schatz certainly saved the best result for last during his recent stretch of World of Outlaws Craftsman Sprint Car Series competition, not only charging forward from row four to earn the Jackson Nationals finale main event victory at Jackson (Minn.) Motorplex on Saturday, June 9, but scoring $40,000 in the process. The victory, Schatz’s largest of the 2018 season thus far, bumped his 2018 World of Outlaws win total to double-digits, now with ten victories against the Greatest Show On Dirt over the course of the season.

Schatz, who started seventh during the $40,000-to-win, Jackson Nationals finale, battled to the front in a hurry, taking command from race leader, Jason Johnson, on lap 18 and never looking back. Johnson was the clear favorite entering the evening finale as the Louisiana native was two-for-two during Jackson Nationals preliminary competition.

“The weekend didn’t start out the best for us. Luckily for me, I have the hardest working team in sprint car racing in my corner. They never gave up and put us in a position to win on Saturday night,” Donny Schatz explained, driver of the Tony Stewart/Curb-Agajanian Racing/Textron Off Road/Ford Performance/Curb Records/Sage Fruit/No. 15 sprint car. “We weren’t satisfied with our results during the first two events at Jackson. We stepped up the program and got ourselves where we needed to be. Everyone did a great job.”

With wet weather causing some interference, Donny Schatz kicked-off his Jackson Nationals campaign with two rounds of preliminary competition on Friday evening and Saturday afternoon, finishing eighth and 13th, respectively. Although finishing outside of the top-ten on Saturday afternoon, which has only happened twice in 27 World of Outlaws starts in 2018, Schatz mounted an impressive charge to finish 13th, climbing ahead from 22nd on the feature grid after being forced to compete in the afternoon’s Last Chance Showdown; Schatz finished sixth during his respective heat race.

A top-ten finish during action at Fairbury (Ill.) American Legion Speedway on Tuesday, June 5, kicked-off Schatz’s long week in Midwest, climbing forward from 13th to finish eighth on a tight, yet racey quarter-mile.

Donny Schatz and Tony Stewart Racing will continue their trek toward the 2018 World of Outlaws championship with two rounds in North Dakota on Friday and Sunday, June 15 & 17. An opportunity to race very close to home, Schatz will compete at River Cities Speedway to kick-off the weekend on Friday, June 15, followed by the Magic City Showdown at Nodak Speedway on Sunday, June 17.

ADDITIONAL MEDIA:
Fans are encouraged to follow the progress of Donny Schatz, Tony Stewart Racing and the No. 15 Textron Off Road/Ford Performance/Curb Records/Sage Fruit/J&J Auto Racing motorsports team on the Web and on social media. More information can be found at www.tonystewartracing.com, as well as at www.donnyschatzmotorsports.com.

Watch Donny Schatz and Tony Stewart Racing live on www.dirtvision.com during each and every World of Outlaws Craftsman Sprint Car Series event of 2018.