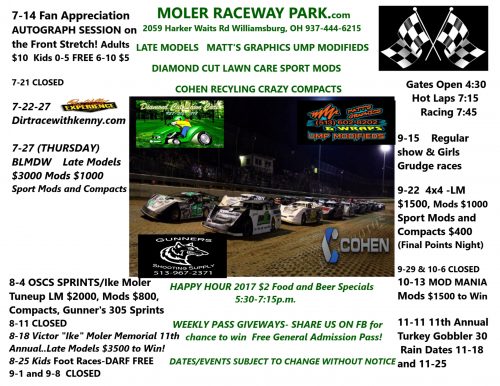 The Best Drivers around show up for the 11th Annual Victor “Ike” Moler Memorial!

8-18-17 – Williamsburg, OH – The 11th annual Victor “Ike” Moler Memorial event at Moler Raceway Park is annually one of the must-see races and this year’s edition was no different. With 29 cars signed in for the late model event, drivers would have to qualify their way into the top to move directly into the night’s A-main event.

It was Lexington, Ky’s Tripp Gerald setting a new track record at 12.230 in qualifications. In the top 6 Diamond Cut Dash event it was RJ Conley taking the win with Jackie Boggs charging from 5th to 2nd to set the front row of the night’s feature event.

In heat race action it was Duane Chamberlain back in a race car for the first time in 2017 and he would go from 3rd to first to claim the win in heat #1. Heat #2 would see a scary accident as John Whitney Jr would flip violently on the opening lap bringing the field to a red flag situation and forcing the track crew to stop the race and do some additional track work. Following the break it was Jesse Lay winning heat #2. Heat #3 would see 3rd place starter Scott James take the win after an early race battle with Jeff Wilson. Groveport, Oh’ Lauren Longbrake would take the win in the B-main event securing her way into the 40 lap feature event.

The wild fast feature event would see RJ Conley jump out front at the green but Jason Jameson would charge to the front early in the race with Jackie Boggs making a run at the top spot as well. As the race wore on, Conley and Jameson would swap the top spot, but by the race`s midpoint it was Jameson out front with Tim Dohm in pursuit. Following a restart on lap 38 Dohm and Scott James would tangle forcing a second restart with only 2 to go. Jameson’s crew was concerned as his machine was overheating, but on the final restart Jameson would set his machine out front and claim his 3rd career win of the Ike Moler Memorial Event. RJ Conley would come home 2nd with Tripp Gerald, Rod Conley, and Duane Chamberlain completing the top five positions, followed by Jackie Boggs, Paul Stubber, Larry Martin, Jr, Lauren Longbrake, Tim Dohm, Scott James, Kody Evans, Jeff Arnold, Mike Hildebrand, Jeff Wilson, Joe Brewer, Nick Signorelli, Roger Ruark, Jesse Lay, Rusty Yarger and Steve Casebolt.

A field of 19 Matt’s Graphic UMP Modifieds were on hand and it was the 2 Brothers, Kuzman Racing, Copart sponsored machine of Josh Rice taking the win and the $1,000 prize. Rice would be virtually unchallenged in the race after the first couple of laps as he rolled to his first MRP win of 2017. Tony Anderson would come home in 2nd spot with Weasel Rhoades, Adam Stricker, and Jimmy Lennex Jr completing the top five spots. Rice and Rhoades were heat race winners.

The Cohen Recycling Crazy Compacts would start off the night with Kyle Willoughby and Devin Puckett winning heat races, and those two drivers would battle throughout the 15 lap feature event before Willoughby would take the checkered flag and the feature win. Justin Dalton would start 20th in the feature and charge to a 3rd place finish just ahead of Chris Shelton Jr and Clyde Pack who would complete the top five positions.

The Moler Family would like to thank racers, fans and sponsors for their support over the years and especially their support in making the Victor “Ike” Moler Memorial one of the premier races in the region!

Next up 8-25-17 will be a Regular show for all classes plus Kids Foot Races on the Front Stretch. DARF members get in Free!