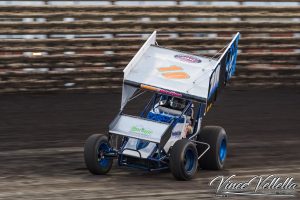 KNOXVILLE, IA (August 17, 2017) – Tyler Bear headed West to Knoxville to compete in the 5-hour ENERGY Knoxville Nationals Presented by Casey’s General Store for the first time. And while things didn’t go as planned, Bear enjoyed the opportunity and will be back.

Sunday night at the Capitani Classic, Bear qualified a respectable 16th his split and was running sixth in his heat race when something broke sending his #10 viciously into the backstretch and for the 25-year old for a wild ride. Thankfully, Bear was okay although the same could not be said for the car.

Scheduled to race in the Front Row Challenge, Bear instead went to work thrashing another car together to compete later in the week. Things came together and Bear was able to sign in Wednesday to do what he has always wished to do, compete at the Knoxville Nationals.

Things went from bad to worse as on Bear’s final practice lap his motor let go in a big way, ultimately ending Bear’s Nationals run before he could even score a time trial lap. An absolute heartbreaker and the latest of unfortunate circumstances couldn’t keep Bear down. “I had a blast being in Knoxville even though things didn’t work out the way we planned. We were still impressed with how we stacked up against the competition when we were on the track,” he said.

Unfortunately, losing his motor at Knoxville has put a standstill on Bear’s plans back home. Be sure to follow Tyler Bear and Tyler Bear Racing on Twitter to keep up to date on when we will see the #10 back on the track.