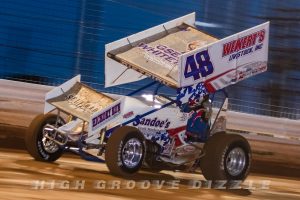 The pilot of the Gary Kauffman Racing/Weikert’s Livestock/Sandoe’s Fruit Market/Pace Performance/Gsell’s Whitetails/Hickory Run Orchards/Carlisle Auto Salvage/Self Made/No. 48 earned his Speedweek triumph at the “Fabulous” Lincoln Speedway on Saturday, July 1. It was Dietrich’s seventh win of the season and his sixth in the Pigeon Hills.

“It was a great week for our team. I think we were capable of a few more wins, but we came up a little short,” Dietrich explained. “Just an overall great effort by everyone involved. I can’t thank our fans enough for their support. They are the reason we are able to do this. We have some big shows coming up on our schedule, so hopefully we can keep things going in the right direction and beat the Outlaws at home in a few weeks.”

Danny Dietrich will continue his 2017 season by returning to Williams Grove Speedway in Mechanicsburg on Friday night, July 14, for the World of Outlaws Craftsman Sprint Car Series Tune-Up; a final test session before the annual Summer Nationals featuring the Greatest Show On Dirt.

Dietrich’s weekend will continue on Saturday, July 15, with a visit to either Port Royal Speedway or Lincoln Speedway. A final decision will be made in the coming days.

Keep up with Danny Dietrich and Gary Kauffman Racing during their entire campaign right here at the official online home of Fully Injected Motorsports – www.FullyInjected.com. Be sure to also follow Danny Dietrich online at www.dannydietrich.com, as well as on all of the available social media networks including Twitter: https://twitter.com/dannydietrich and Facebook: https://www.facebook.com/GKRracing/