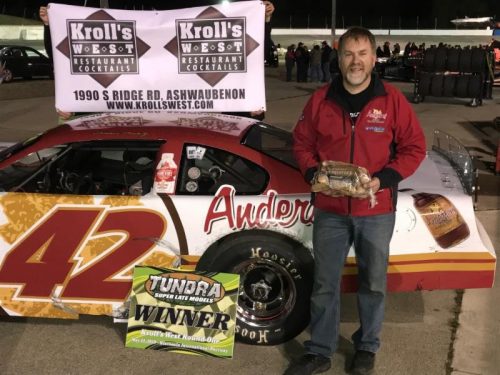 Kroll’s West Round One Results

KAUKAUNA, Wis. (May 11, 2019) – Dennis Prunty had to escape an early sticky situation and hold off the advances of a hard-charging Casey Johnson to pick up his second straight win in Kroll’s West Round One at Wisconsin International Raceway Saturday night.

It was the fifth career win for Prunty with the TUNDRA Super Late Models Powered by Wisconsin Potatoes.

The two most nerve-wracking moments came early and late in the race for the former series Champion.  On lap four Prunty was just able to dodge a spin by Luke Fenhaus, averting what would have been major damage to both machines.  Late in the race Prunty was being chased down by fast qualifier and defending TUNDRA Champion Casey Johnson.

Johnson got to the rear bumper of Prunty on lap 49 of the 50-lap feature but did not have enough time to challenge.  Prunty said he was well aware Johnson was approaching, and saw the blue 47 filling his rear-view mirror.

“I should probably take [the mirror] off because I think it slowed me down watching [Johnson] and [Stumpf] come through,” Prunty said.

In a power-packed feature field, Prunty found himself starting on the outside of defending Red, White and Blue Champion Bobby Kendall in row three.  Two rows up Jordan Thiel wrestled the early lead away from Fenhaus.

The opening green flag did not last long as a chain reaction from the front of the field sent cars scrambling.  Cameron Clifford fell victim of cars ducking and dodging each other and spun exiting turn four.

On the following lap-one restart Thiel was left to try to fend off Stumf.  He was able to do so until the caution on lap four for the Fenhaus spin.  No one was collected, but Prunty was the closest as he had to be keen on his brakes to avoid the right side of Fenhaus’ car.

On the following restart the Top Five broke away from the pack.  Thiel tried to fend off Stumpf to his inside while Kendall, Brent Strelka, and Prunty completed the lead group.  Eventually Kendall snuck past Stumpf and put pressure on Thiel.  They would exchange the lead on laps nine and ten.

One lap later Thiel secured the top spot again and Kendall fell into the hands of Stumpf.  As Stumpf went to the inside for the second spot, Thiel slipped out of turn four.  Suddenly Stumpf found himself in the lead.  He brought Prunty and Maxwell Schultz along on the inside.

Prunty waited patiently to make his move on Stumpf and had an opportunity to get to his bumper on lap 19.  He closed quickly as Stumpf appeared to bobble in turns three and four.  Prunty continued his momentum and forced his way past Stumpf into the lead.

“[Stumpf] ran a really good race and I got into him to take the lead.  I apologize for that, but we had a fast car,” Prunty said.

As the race carried on, Johnson continued to ascend through the field.  After Maxwell Schultz dropped off with issues while running third, Johnson closed in on Thiel to scrap for the position.  Johnson took the spot on lap 25 and next set his sights on Stumpf in Second.

Johnson eventually got to the inside line on Stumpf but was unable to make the pass after a couple laps of disputing the spot.  He eventually had to tuck back in line when they approached lap traffic and reset his challenge.  This proved to be a critical moment.

“I just had to make quicker work of [Stumpf], but I didn’t want to rough him up.  He’s got a heck of a motor underneath the hood of that car,” Johnson said.

On lap 45 Johnson was able to slip past Stumpf but Prunty had built up a sizeable advantage.  Johnson chewed away very quickly and had some help when Prunty approached a lapped car.

However, he only was able to get to Prunty’s bumper exiting turn four on the way to the checkered flag.

Just like last season the win sets the tone for the former Champion as he now allows Neil Knoblock to tag in for the next event.  Due to setting fast time and passing the most cars, Johnson leaves WIR with the point lead and a strong outlook for a title defense.

The next event for the TUNDRA Super Late Model Series is the Bev Aschenbrenner Memorial presented by River Valley Bank and A&A Lock Service at Marshfield Motor Speedway on Saturday, June 8. Qualifying is scheduled for 4:30 with racing slated for 6 p.m.